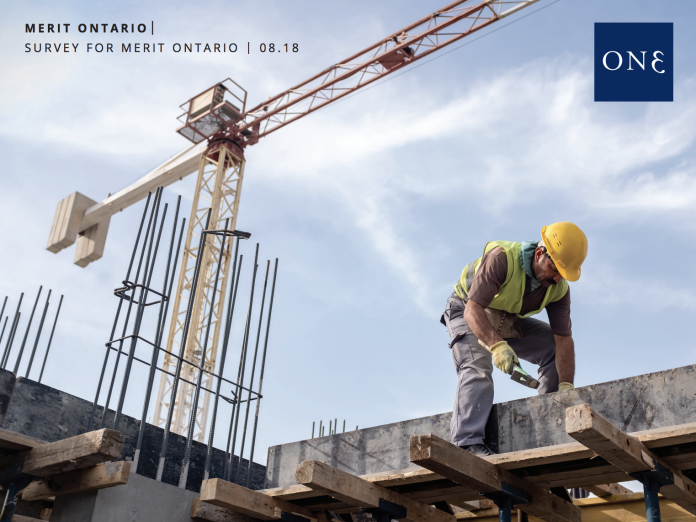 “The legislation is currently under review,” a Ministry of Labour spokesperson wrote, following a Merit Ontario survey indicating the majority of Ontario residents want secret ballot elections for construction unions, and allowing non-union companies to bid for public-sector construction work.

Under current rules, if the majority of construction workers on a given day sign union cards, the union is almost automatically certified. Unions will quite often structure their affairs to sign up workers on weekends when only a skeleton crew is on the job, resulting in mandatory certification of the entire organization, often involving hundreds of employees.

Merit Ontario, which advocates for open shop construction, says its survey found that nearly three-quarters (73 per cent) of Ontarians think a secret ballot should be required for forming a union, and nearly half (48 per cent) strongly agree. This is the rule that currently applies in industries other than construction.

A second issue – whether bidding and working on public works should not be restricted to companies with unionized employees – received a 67 per cent majority.

As well, Merit Ontario says the majority of Ontarians (70 per cent) favor lowering apprentice-to-journey person ratios, and this is even higher among PC voters (78 per cent).

“It’s time to end the discrimination against non-union construction companies,” Merit Ontario executive director Michael Gallardo said in a statement. “All we ask for is a level playing field. Denying competition drives up costs which are ultimately born by taxpayers. It is patently unfair that only unionized companies should be allowed to bid and work on government projects.”

“The right to a secret ballot is sacrosanct in a democracy,” said Gallardo. “No worker — or any Canadian – should ever be subjected to intimidation when casting a ballot.”
While Merit Ontario’s positions are not new, the change since the June election is that the new provincial government is conceivably much more likely to support its position than the previous Liberal/NDP alliance.

“The new government in office makes an opportunity for progress on these files,” Gallardo said. “We believe these changes also help to increase the competitive climate. We need to see modernization. We need to see changes.”

Gallardo indicated the survey is intended to provide data to back Merit’s initiatives to achieve policy and legislative changes.

The survey showed extremely favourable views of the construction industry, in general. Some 87 per cent of respondents agreed that the industry is an important source of good jobs and employment growth.