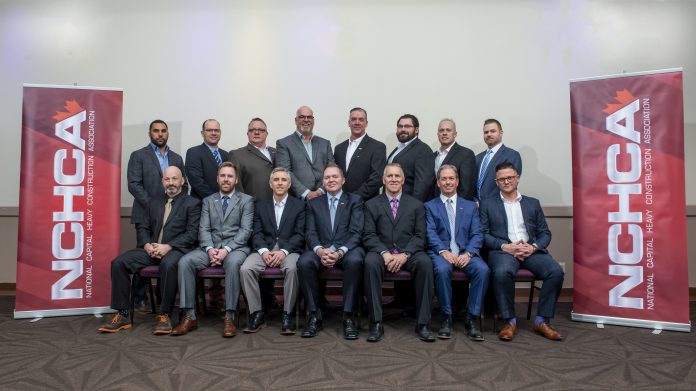 The National Capital Heavy Construction Association (NCHCA) has thrived through four decades, with a focus on member services and advocacy for contractors and suppliers serving the Ottawa area roadbuilding and sewer and watermain infrastructure sectors.

While the industry has evolved, interviews with current and former association leaders and documentation, including Ottawa Construction News’ twentieth anniversary NCHCA profile published in October 1998, reveal an association that values it its heritage, long-standing relationships and commitment to its core values.

As an example, executive director Kathryn Sutherland combines law and engineering degrees – making her an ideally qualified champion for an industry that derives a significant percentage of its work from competitively bid public works projects. (There is also a sizeable private component, especially working with major developers on site infrastructure.)

Bob Smith, the association’s second president who served during 1981-82, says Sutherland’s relationships with the industry have even deeper roots.

Smith, even though he has been retired for several years, continues to be invited to association events. In fact, all of the past-presidents are briefed and consulted on important issues, a quality he believes helps the association to stay true to its values.

He said that NCHCA, started in 1978, was a joint initiative of the Ottawa Sewer and Watermain Contractors Association and the National Capital Roadbuilders Association. The goal was to have one voice representing the heavy construction contractors in the Ottawa area.

Several companies worked together in both sectors, and many projects combined both sewer/watermain and surface infrastructure work – and both groups faced the same challenges with project specifications and standards, so it made sense to amalgamate them into one association, he said.

Then, as today, the amalgamated associations had common social interests.

“There was an overlap of the membership,” Smith said. “They (the sewer and waterman association) had a famous golf tournament called the Manhole Open. And we (the road builders) started one called the Pothole Open.”

NCHCA’s annual golf tournament continues to be one of the association’s annual highlights and is now called the NCHCA Heavy Construction Golf Tournament.

While social events provide the glue that help members build and maintain relationships, much of the association’s work focuses on quiet, behind-the-scenes efforts to improve safety, enhance members’ education, and advocate for consistent and fair municipal bidding and tender specifications standards.

The industry is intensely competitive, with a diversity of contractors seeking their own sub-trade and supply quotes as they seek both public and private sector opportunities, though the number of public sector clients has declined sharply with the amalgamation of several municipalities into the City of Ottawa.

Past presidents remember how the industry has changed in the past four decades, notably with equipment and bidding processes.

When Smith started, he recalled how contractors gathered sub-trade quotes by phone, and then rushed to personally deliver the sealed bids in time for the tender closing deadlines.

“The changes in equipment have been massive,” wrote Ernie Johns, who served as NCHCA president in 1991-92. “On one of my summer jobs we actually had a steam shovel. In my early days, all the cranes and shovels were cable activated.”

“One of the biggest improvements has been worker safety,” Johns says. “The number of incidents has been reduced, and especially the number of serious injuries and fatalities is a measure of the effectiveness of the safety committee and the CSA.”

Indeed, safety continues to be one of the NCHCA’s highest priorities. The association presents a safety award each month to an individual who demonstrates awareness of safety issues and acts proactively to prevent injury or damage. Then a finalist award is recognized at the association’s annual meeting.

Michael Rodrique, who served as president in 1997-98, said he has noticed how there is greater co-operation and improved communication between associates, consultants, contractors and government representatives. “Education, training, recruitment and environmental awareness are some of the priorities that are common elements for all sectors of the industry. These are improvements that keep our industry relevant and attractive to young people coming from school.”

“The industry culture has changed with the new generations coming into the business now,” said Wade Cloutier, president for 2013-14. “It has become more technologically driven and faster in response to opportunities. We have become more professional in our behaviour and will have to include better communications with other stakeholders like the public on the projects now with social media usage.”

Current president Steve Goodman says the NCHCA is thriving and has plans for a range of initiatives and member benefits.

Initiatives this year include:

The past presidents say they believe the association should continue and enhance its traditions and values.

“We have a great industry to grow with in the Ottawa area, and we should invite, mentor and support the next generations in becoming part of the tradition of building projects that everyone uses daily,” said Cloutier. “Our relationship with the cites and governments who provide us with work is important, added Ernie Johns. “This requires constant contact and promotion.”

“The association needs to help the city with its education program,” says Michel Rodrique. “Keep the momentum going, make it interesting, relevant, current and involve the community and engineering students so they are exposed to our industry.”

“Our industry is a significant economic driver, with over 9,000 employees and an annual capital investment of $165 million,” current association president Steve Goodman says. “We play a vital role in the construction and maintenance of the infrastructure that is so critically important to maintaining the well-being of our community.”

He and other NCHCA leaders believe the NCHCA is well prepared for its next 40 years.