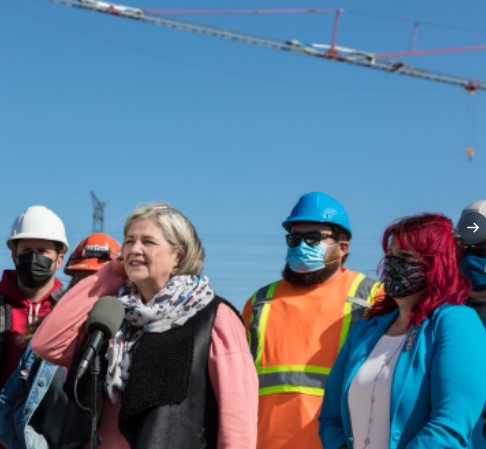 Ontario’s New Democrats are promising to build 1.5 million new homes and expand Peel Memorial Centre for Integrated Health and Wellness to include a 24-hour emergency department if elected June 2.

Leader Andrea Horwath says timelines and costs for various projects will be included in her party’s costed platform, which she has repeatedly said is coming soon. She pledged, however, that work on the projects would start “immediately.”

“People in Brampton have waited too long and they’ve been ripped off,” she said at the Friday announcement hosted outside Brampton Civic Hospital, the city’s only full-service hospital.

“We’re not going to rip off the people of Brampton, we’re going to get these things done because they deserve no less. They deserve to have their healthcare needs addressed.”

The impact of the pandemic has prompted renewed calls for governments to address the relative dearth of health-care services in the community.

Progressive Conservative Leader Doug Ford also made several health-care focused stops in the city in the lead-up to the election call, including a promise to establish a new medical school in Brampton.

Also on Friday, the New Democrats detailed their housing policy including a plan to spur the construction of 1.5 million new homes over the next 10 years if elected.

Horwath said her housing plan, which would see a net cost of $3.7 billion over the first four years, aims to make it more affordable for families to have their own home, not speculators wanting to make a fortune.

Horwath’s goal of 1.5 million homes is the same number recommended by a government-commissioned task force report earlier this year, and she said it would include a mix of starter homes, purpose-built rentals and affordable housing units.

The NDP plan would end exclusionary zoning and update growth policies to increase the supply of affordable housing in pedestrian-and transit-friendly neighbourhoods. They also promise to establish Housing Ontario, a body that would finance and build at least 250,000 affordable and non-market rental homes over 10 years, operated by public, non-profit and co-op housing providers.

The New Democrats also said they would provide help for first-time home buyers, including giving people from households with incomes under $200,000 access to home equity loans of up to 10 per cent of the purchase price to help with their down payment.