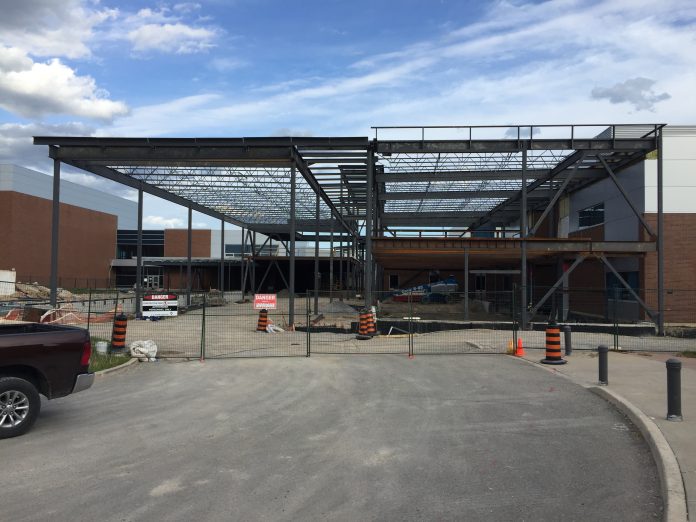 The new $15 million Niagara College Welland Campus student commons is a model of efficiency and success, providing cohesion for a campus that has evolved slowly over time.

The project, a two-storey addition and renovation to the college’s Simcoe building, includes more than 33,000 sq. ft. of newly built space and 600 sq. ft. of renovations.

College students were welcomed to the new Student Commons with a cake and coffee giveaway, and an inside look at the new facility, which also includes an innovative video wall and a small green-roof. A unique 1,300 sq. ft. student activity room includes glass pivot doors, and a standalone sound and projection system.

Among the challenges: Maintaining full functionality of the college for staff and students while work was ongoing.

Part of this challenge, according to Gow Hastings’ designer Hugo Martins, was that the addition connects three buildings built over a span of 50 years.

“There have been many iterations of evolution of the Welland Campus and while there has been a concerted effort to connect separate buildings via internal corridors, the space appeared incremental in nature, disjointed with a lack of clear circulation wayfinding and access to important services,” he said. “The new space seamlessly connects to the existing corridor system of the college to make where to buy modafinil online this a true hub of activity.”

The student commons includes a new centrally located social hub in the heart of campus;  with study areas, places to relax, prayer rooms and other support services. “There is a food court and cafeteria with direct links to nearby student services, the library commons, coffee stops, the Welland Campus store and the transit loop,” says Martins.

The newly constructed façade establishes a “landmark architecture to enhance the entrance to the college to establish a new front door to the revitalized campus,” says Martins.

Morrone says expansion focused on student needs and comfort as well as functionality. “The seating is spacious and abundant and, rather than a typical table seating arrangement, has more of a comfortable lounge feel.”

Finishing specialities including perforated aluminum panels, cedar slat walls, felt accents, and an extensive use of Corian for furniture and wall finishes to create a distinct, and warm feel. “There is also a green roof that has been installed over the kitchen and additional trees have been planted outside to create a really welcoming and inviting space,” he says.

Designed to shadow LEED requirements, the two-storey glazing and the clerestory provides a substantial amount of natural light. Martins says  light fixtures are supported by a daylight harvesting system with photocell control.

“Another feature is variable speed air handling units and ceiling fans which will reduce the demand on the HVAC system,” he said.

Both firms had experience on previous Niagara College projects. They worked as a team with a collaborative planning approach from initial design through construction, the architect and contractor said.