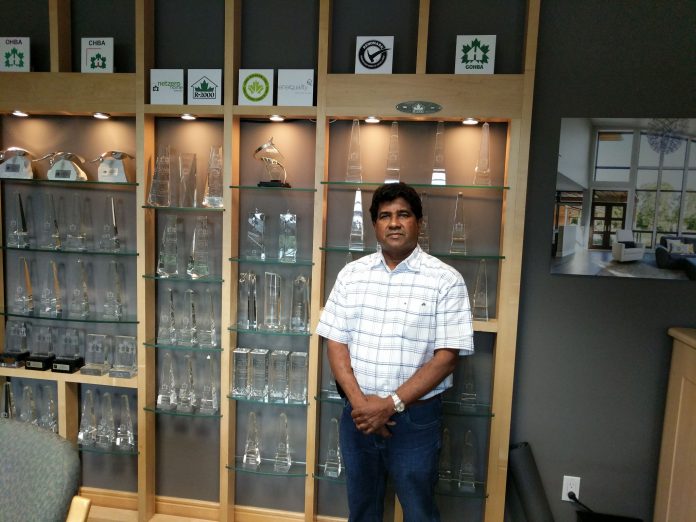 Roy Nandram, a 62-year-old general contractor who now leads the Greater Ottawa Home Builders Association (GOHBA) as its president, says he would like to see the association to become more inclusive, friendly and innovative – traits which describe his own business and life.

In many ways, the association is doing well, he indicates. With about 365 members, it is the province’s second largest home builder association (obviously BILD in Toronto has more members) and it is taking the lead advocating for members’ interests and as it helps them to build relationships and achieve business success.

However, Nandram would like to take things further – increasing membership to more than 400 during the next couple of years, as he works with the association’s committees and executive to increase membership participation and improve retention.

Some of the ideas he and other board members and committee members are developing with executive director Jason Burggraaf include a document/infographic outlining the member benefits, discounts and opportunities. The association will also provide increasing coverage of renovation, building innovation and environmental themes – topics close to Nandram’s business heart and experience.

But he realizes more needs to be done to connect the association with its members, especially younger members with families and business responsibilities pulling away their time away from association activities.

An example of the new sort of program will be the GOHBA’s first family picnic on Aug. 17.  “It will be free for members and their families – we have about 10 large members’ sponsoring this event,” he said.

He said the idea relates to his own family’s annual reunion – and so he has added a bit of fun to the event – a cricket match (however, with a softball to avoid injuries, and plenty of informal instruction for the members who most likely have never played the game in their lives.)

Nandram says he also is working with builder members to encourage them to follow the association’s motto: “Be a member – do business with a member,” spurring their subtrades and suppliers to sign on and, of course, encouraging them to consider working with the new members

He certainly has connected and contributed to the association since joining it, for several years leading the Green Building Committee, later renamed the Housing Innovation Committee, before joining the association’s executive committee.

His business spans custom homes, renovations and subdivision development projects – and while he isn’t currently focusing on the sector, RND has built several commercial  buildings.  He has a special passion for what he calls the “missing middle” — “the mid-density type of structure, with four or fie stories, perhaps worth $4 to $5 million, rather than singles.”  He thinks there is unmet demand for larger apartments suitable for families with more community spaces.

Nandram says he is currently developing a “flexible platform design” that would allow a homeowner to separate a unit for rental or extended family, which could be removed to create a larger single family home when the family needs extra space.

Much of his business focuses on environmentally responsible projects, and he demonstrated how his office has solar power capacities to generate about 60 per cent of its requirements, and he has built homes achieving 100 per cent Net Zero energy efficiency.  He demonstrated a special filtering device that his staff use to clear out Volatile Organic Gases (VOCs) from new projects and lighting/blind systems to save on energy without sacrificing comfort.

His company has won dozens of GOHBA Housing Design Awards – in some years, leading the association in the number of earned trophies – in part because he has worked with some of the city’s most successful designers, and also because of his eagerness to adapt environmental technologies.

Currently, RND has six employees in the office and eight field staff.  Most site tasks are handled by a diversity of qualified subtrades, though his staff can handle the small or multi-trade tasks where interdisciplinary skills are essential.

Nandram says he has no intention to retire in the near future, but says he is starting to work on a succession plan. In the meantime, he says he will continue to focus on his unique projects and innovations and his association leadership.