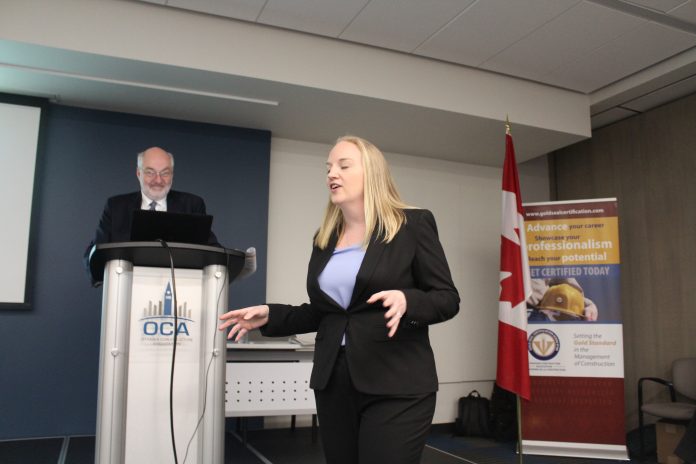 How will the adjudication provisions under the new Ontario Construction Act impact the way subtrades, general contractors and owners resolve their disputes?

There are many unanswered questions about the actual impact of the adjudication provisions set to go into effect on Oct. 1, tied with prompt payment rules intended to speed up payments through the construction supply chain.

Experienced adjudication support specialists from U.K-based Driver Trett outlined some of the challenges and processes at an Ottawa Construction Association (OCA) presentation on May 1.

Driver Trett’s Canadian operations director Kevin O’Neill introduced Nicola Huxtable and Geraldine Fleming from the company’s UK offices, and the three demonstrated a mock dispute resolution process to demonstrate the issues and challenges in the new system, based on their years of representing adjudication clients.

The new Ontario dispute resolution system is designed to be relatively inexpensive and rapid – with most disputes being resolved within 30 to 44 days compared to the years and massive amounts of money that conventional court cases would require.

However, while the system will be much less costly than conventional litigation, it won’t be free.  Adjudicators selected either by agreement of the two parties in the dispute or by the Authorized Nominating Authority (ANA) must be paid, and it is likely that legal counsel and adjudication specialists will need to be hired by both sides.

The speakers indicated that in the U.K. it generally doesn’t make sense to start the adjudication process for disputes of less than £50,000 – or close to $90,000 Canadian.

Beyond technical experts, often lawyers are needed to prepare the documentation and responses  — and the costs will mount quickly because of the short time frames. “There’s a short, intense period of cost,” said Huxtable.  In preparing for the deadlines, sometimes this involves “working through the night” to meet filing deadlines with days – then there are periods of waiting and then more intense work as the adjudicator is selected and works through the issues.

Nevertheless, the costs are significantly lower than the traditional method of dealing with disputes, which could drag on for years and years.

In both the UK and Ontario, disputing parties have the option of using the small claims court system to resolve matters relatively inexpensively, and this may be the route to go for unresolved issues under $25,000.

Kevin O’Neill suggested that in some cases, the power will rest with organizations with the most money and which are best prepared for the adjudication process, and that would be leverage for informal negotiations to resolve the issues.

Fleming and Huxtable said that adjudication costs can be greatly reduced if there are well-organized records and documentation detailing the issues with evidence and supporting resources.  Much of the cost and time in preparing for adjudications is in gathering the material to present the case, they said.

An audience member asked about whether adjudication will be effective for complex disputes.

The answer, in part, is that given that each dispute is unique, it will depend upon the preparation completed pre adjudication, the agreement of the parties to extend the timetable if necessary, and of course the skill of the adjudicator.

O’Neill said it will take some time for the new adjudication system to be put to the test, suggesting that it could even take as long as 1.5 years after the new rules go into effect, meaning it would be sometime in 2021.

This is in part because of Ontario Construction Act’s transitional rules, which mean that projects under-way or in the procurement phase before Oct. 1 will operate under the old rules.

But there also will be hesitancy to be the first to trip the wire for the process, in part because of uncertainty of how the system will work and whether the initial adjudication decisions will stand up in court.

In the UK, for example, there was a significant amount of litigation following the introduction of adjudication about two decades ago, but that litigation dropped sharply after courts ruled that indeed they would not reinterpret the adjudicators’ decisions. Now “over 95 per cent don’t go court, and adjudication is the final dispute resolution forum,” Fleming said.

“Adjudication should mean that the prompt payment provisions are enforced,” she said.  “Whether this is the case remains to be seen.”