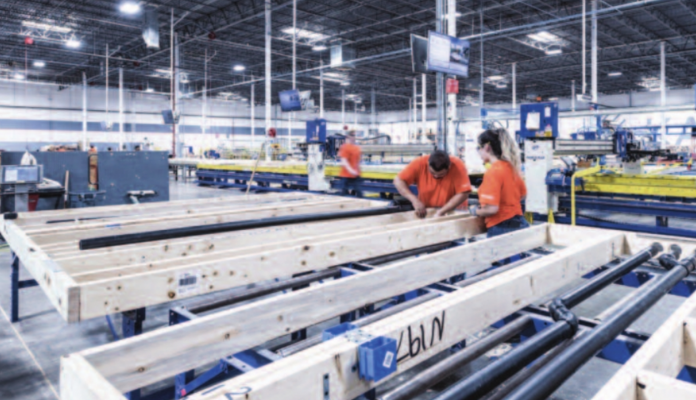 “The tipping points that magical moment when an idea, trend or social behaviour crosses a threshold, tips and spreads like a wild fire.” (Malcolm Gladwell)

The construction industry is notoriously known as one of the slowest industries to accept change and evolve with recent technology. Even looking outside of a monitor screen, the industry is still resistant to assistance from technology in progressing manual labour which has always been the foundation of building buildings. This is about to change.

Off-site construction. The process of planning, designing and fabricating building elements at a site other than the final location, creating a more rapid and efficient construction of a permanent structure.

The key is this tipping point is not happening because the industry has finally accepted progressive ideas and found a willingness to try the new methodologies. This tipping point, or what Gladwell refers to as that magical moment, will be forced out of an act of urgency and survival by three main factors:

The current labour pools have almost dried up and the cause is directly correlated to the push for all high school students to go to college and earn a degree.  As noble as that sounds, the act has been a detriment not just to the construction and other industries but to the young adults that were pushed that direction. Numerous studies show the debt that student loans accrue and the burden these individuals live with. Sometimes for the rest of their life.

“As man as 40 per cent of borrowers could default on their student loans by 2023.” (H. Hoffower from the Business Insider.)

Some studies have cross referenced this data with the labour shortage in the construction industry, showing that trade schools graduates earn more on average than their new graduates with a four-year B.A. degree. Contractors and owners will be forced to get more creative with projects and procurement methods with the construction occupation market projected to grow 11 per cent from 2016 to 2026, a gain of 747,600 new jobs, according to data from the US Bureau of Labour Statistics.

Advantages to modular construction, McKinsey wrote, are that it can deliver projects 20% to 50% faster than traditional methods; a potential for costs savings of up to 20%… and as ripe market around the world ready for this kind of disruption.”

In the last two years, material and labour costs have grown faster than contractors’ bid for work causing contractors to have thinner profit margin, according to this published report.

The two goliaths, owners and contractors, of the construction industry are quickly coming to an impasse. One that can be mitigated with the implementation of off-site construction.

The summer of 2019 has been considered record-setting temperatures across the United States.  The National Weather Service has even declared the June of 2019 the hottest June ever including 90-degree weather in Anchorage, Alaska. These factors bring major risk not to just costs of construction but also the safety of employees. See this published report. Contractors, like Choate Construction, are during concrete pours at 2 a.m. to avoid the risks involved with the heat at their Nashville jobsite.

The current economy is forcing the construction industry to keep up and due to the recent recession, no one is volunteering to take their foot off the gas.  These three factors combined are forcing the key decision makers to become opportunistic.

The term off-site refers to the process of being able to manufacture the series of components inside a warehouse where weather, construction quality and processes are controlled and streamlined.  Two of the larger pushes within off-site construction are prefabrication and modular.

Prefabrication refers to the IKEA process. A full run of piping within the building is virtually built and then manufactured off-site. The components are labeled sent to the site with instructions (Component A connects to Component B) and installed.

Modular refers to producing full sections of a building. Repetitive items found within a building a repeated built in an assembly line with all trades involved. Marriott is a leader in this process producing the full hotel room (all the down to installed bedframes and box springs) inside a warehouse. After being shipped to site and the units are stacked on top of another creating the form of the building as well as the units inside.

Both of those examples reduce field labour and construction costs while providing the ability to control weather and risk.

Back to the tipping point. The industry cannot afford to be slow to adopt. It can no longer have an unwillingness to change or evolve.

Jacob D’Albora is director of BIM-FM Services and associate vice-president at McVeigh & Mangum Engineering, Inc. in Charlotte, NC.  He can be reached by email at jdalbora@mcveighmangum.com or by phone at (704) 547-9035. Story copyrighted by the writer, and republished here with permission.