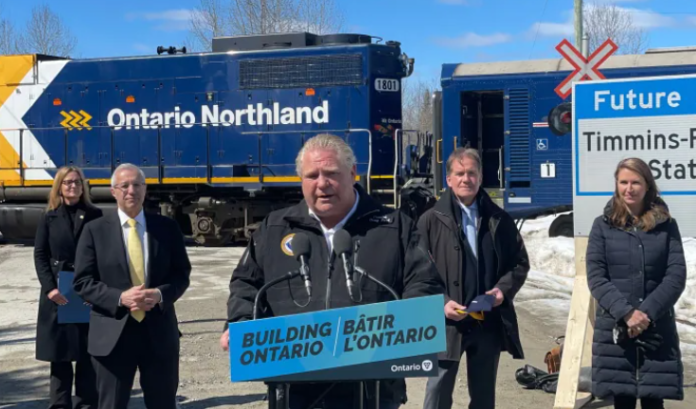 The Ontario government says it is investing $75 million to restore passenger rail service to northeastern Ontario for the first time in more than a decade.

Premier Doug Ford made the pre-election announcement in Timmins after travelling from Toronto on board an Ontario Northland train.

The government released an updated initial business case for passenger rail service between Timmins and Toronto on Sunday, while future work on a preferred route with 16 stops will include a rail link to Cochrane and then a connection to Polar Bear Express service to Moosonee.

The year-round service, which the province says could begin in the mid-2020s, would allow tourists to visit the north and enable northerners to travel to the provincial capital for sporting events and to access medical care.

Service, which was cancelled in 2012, will range from four to seven days a week based on seasonal travel demands.

Ontario Northland currently operates four buses daily between Toronto and North Bay, and one to two buses daily from North Bay to Timmins and Cochrane.

“Restoring this rail service will be a huge boost not only for families up here, but also to local tourism operators who will once again be able to show the world the type of beauty that is only found in northern Ontario,” Ford said.