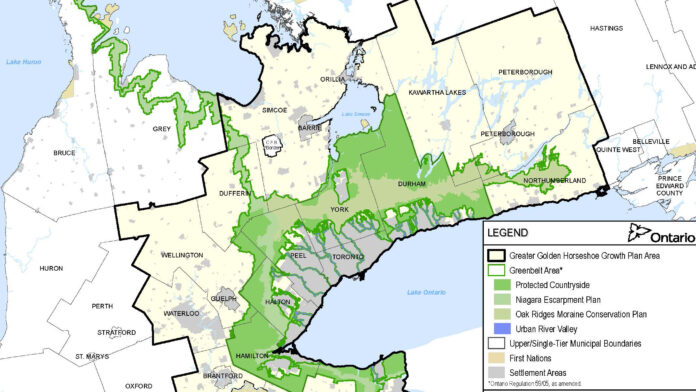 Ontario’s integrity commissioner and auditor general both announced Wednesday that they would conduct separate investigations into the government’s decision to open protected Greenbelt lands up to housing development.

The integrity commissioner is launching an investigation into Municipal Affairs and Housing Minister Steve Clark based on a complaint from incoming NDP leader Marit Stiles. She sought an investigation into what she calls “curious timing of recent purchases of Greenbelt land by powerful landowners with donor and political ties to the Ontario PC Party.”

Stiles cited media reports that some developers bought that land over the past few years despite Clark and the premier previously publicly saying it wouldn’t be developed, with one purchase happening as recently as September — two months before Clark announced he’d open the lands up.

“The whole point of this is to shine a light, I think, in some of the dark corners to see whether or not anything has actually been conducted improperly,” she said at a press conference Wednesday.

Clark announced in November that the government will remove land from 15 different areas of the protected Greenbelt, while adding acres elsewhere so that 50,000 homes can be built.

Clark and Premier Doug Ford have both denied tipping off developers ahead of the public announcement.

Clark “looks forward to being cleared of any wrongdoing at the conclusion of the investigation,” a spokesperson for the minister said in an emailed statement.

Commissioner J. David Wake wrote that when given a chance to respond to Schreiner’s complaint, Ford and Clark said the specific Greenbelt lands were selected by development by public servants who were subject to an enhanced confidentiality protocol.

Stiles, Schreiner and interim Liberal Leader John Fraser had also jointly written to the auditor general to ask her to conduct a value-for-money audit of financial and environmental implications of the Greenbelt decision. Bonnie Lysyk confirmed in a letter Wednesday to the three leaders that she would investigate.

“This issue has garnered significant public attention over the past few months and has been repeatedly raised during question periods in the legislature. We have received considerable correspondence on this issue,” Lysyk wrote.

“While requests from individual members of the legislature and the public are assessed and factor into our audit work, a letter requesting us to conduct work in a specific area jointly signed by the leaders of all Opposition parties of the Ontario Legislative Assembly is a request of high significance.”

The government has assured Lysyk she will have their full co-operation, she said. Audit work is set to start in the next few weeks.

A spokesperson for Clark said the developments will see desperately needed affordable and attainable homes built, and that the government pledges to “set aside” any environmentally sensitive areas to protect them before any construction begins.

Schreiner said he is glad the two investigations will go ahead, though he conceded that neither office has particularly strong disciplinary powers.

“But the court of public opinion is powerful and the people of Ontario need to know the truth,” he said at a press conference. “There needs to be transparency and accountability around these land deals that do not pass the smell test.”