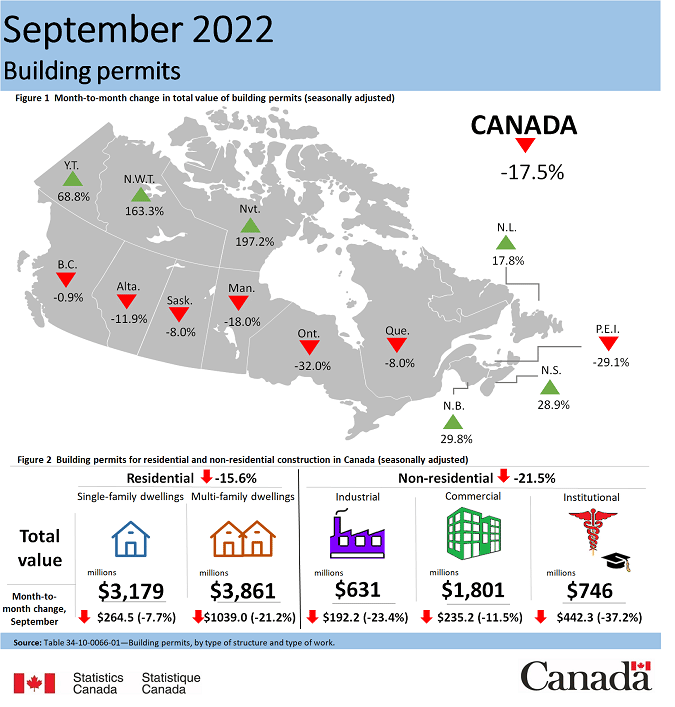 Statistics Canada reported a 17.5 per cent drop in building permit values across the country in September.

It was the largest monthly decline ever recorded since Stats Can began publishing results in September 2019, with a total value of $10.2 billion. Residential and non-residential sectors posted big drops, falling 15.6 per cent and 21.5 per cent, respectively.

Nationally, the value of residential permits fell to $7 billion and the multi-family sector dropped 21.2 per cent, with Ontario recording a 40 per cent drop after posting a record high in August when there were four permits valued at over $100 million, including one for $480 million. In September there were no permits over $100 million.

Single-family homes permits dropped 7.7 per cent, led by large declines in Ontario, Manitoba and Alberta and values were down across the country in the non-residential sector, falling 21.5 per cent, to $3.2 billion in September.

After three consecutive increases, the institutional sector fell 37.2 per cent, commercial permits fell 11.5 per cent, and industrial declined 23.4 per cent to its lowest level since late 2021.

Overall for the third quarter of this year, building permit values fell 6.3 per cent to $33.7 billion after, with the residential sector falling 5.6 per cent and the non-residential down 7.9 per cent to $10.8 billion.