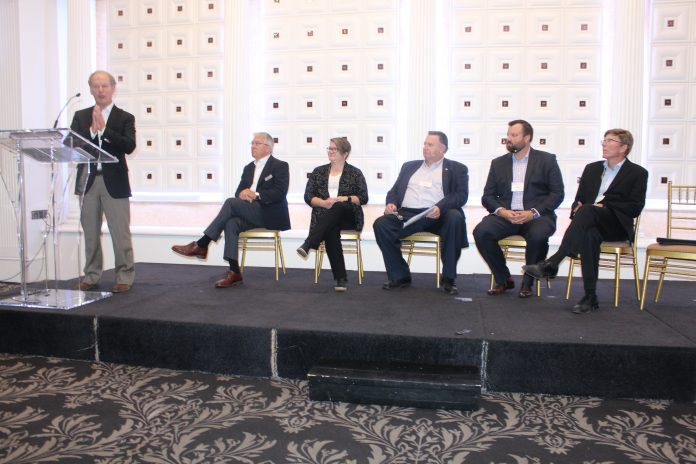 Most contractors will see almost no immediate change because of the Act’s transition provisions. Only projects where the procurement process hasn’t started as of today will qualify for the new dispute resolution mechanism, giving contractors the right to walk off the job if they aren’t paid within 10 days if an adjudicator, through a rapid process, rules in their favour.

The Act’s new provisions will probably only affect a significant number of contractors after six to eight months, speakers said at an Ontario General Contractors’ Association (OGCA) presentation about the Construction Act, Part Two, last Thursday.

But the new process will require a “cultural shift” within the industry, speakers representing various interests including an owner, consultant, general contractor and sub trade, said in a panel discussion.

She said adjudicators would work for flat fees for disputes under $50,000, with an increasing schedule of hourly fees for larger projects. There also is a distinctive process and workflow system to manage the work.

Fees will not be excessive, starting at $800 for disputes under $10,000 and growing to $1,000 for disputes between $10,000 and $24,999. Since in most cases both sides equally share in the adjudication cost, a subcontractor or general contractor could start the adjudication process for $400 or $500. This would be the total cost, as while expenses and disbursements are possible for larger adjudications, these won’t be allowed for smaller claims, she said.

Whitmore said if there is a dispute, she hopes that the two sides can agree on an adjudicator, because they are likely to be happiest with the results if they do. However, if they don’t agree, ODACC is required under the legislation and regulations to select the first available adjudicator from its roster.

During the panel discussion, speakers outlined how they think the new system and rules will affect their businesses, and all said there are still many uncertainties about the process.

“The adjudication process is meant to be rough justice,” said moderator Roy Bassett, vice-president and chief underwriter of Travellers Canada, which sponsored the event with the OGCA. “From the start of the process, you are going to get a decision in 30 days.” “The adjudicator is mandatory if you want to implement ‘pay when paid,’ he told the audience of general contractors.

However, with all the specific details about timing, there still are complexities.

For example, the entire prompt payment mechanism only kicks in when the general (or prime) contractor submits a “proper invoice” to the owner. This invoice needs to comply with specific details. The adjudication process will begin if an owner either fails to pay the invoice in the required 28 days or issues within 14 calendar days its notice of dispute – and the owner still needs to pay the portion of the invoice not in dispute.

There’s a cascading level of notices to sub trades and sub-sub trades, based on seven day cycles. In the ideal situation, once a “proper invoice” is paid, then the first line subtrades need to be paid within seven days.

However, while contractors cannot opt out of the Act’s prompt payment requirements they can agree with the owner on different invoicing cycles, such as milestone payments. If a sub trade wants to be paid and the owner declines to pay before the actual “proper invoice” is issued, then the sub trade won’t be able to implement the Construction Act prompt payment regulations.

(Speakers advised the audience that subtrades have the right to ask general contractors and owners for key information, such as when the proper invoices are due, and of course whether their work is covered under the new Construction Act’s provisions.)

Once the adjudication process starts, it must move quickly, according to the law. If the two parties can’t agree on the adjudicator within four days, ODACC will select one within seven days. Submissions need to be completed with a tight time frame, as well, because except in exceptional circumstances, the entire process must be completed in 30 days.

This may not be difficult for a small job, but the scale and process will be intense for larger disputes.

Panelists including Paul Raboud from Bird Construction, John Rosenberg of JMR Electrical, Jackie Kennedy from the City of Toronto and Eric Wildschut, project manager with Jacobs, said there will be challenges when disputes involve matters such as scope of work and change orders.

For example, if a sub trade seeks additional compensation for a change order, the dispute mechanism doesn’t start until the general contractor includes the claim in the “proper invoice,” and the owner refuses to pay it. Scope of work disputes will also present real challenges.

And how do you allocate and determine the amount in dispute between the owner, general and subtrades?

“The act is not clear,” said Raboud from Bird Construction. “There are no amounts for subs included in the proper invoice. You have a mishmash of costs, you bill that amount (and) it’s not gong to be exactly clear about the amount that is related to (an individual) subcontractor.”

If the adjudicator rules in favour of the sub trade, and the payment isn’t made, then the subcontractor can demobilize and leave the job site without penalty – and only return if the amounts due are repaid (with interest), plus reasonable fees for demobilization and remobilization.

The adjudication process doesn’t preclude the parties from taking other measures including lien filings and court litigation – but the premise of the legislation is that the power shifts from the owner to the contractor and sub trades because in the traditional model, the trades would have to incur significant legal expenses to sue for their money, while the owner retained the cash.

Under the new rules, payment, if the adjudicator rules in favour of the lower tier contractor, would result in the sub trade having the cash, with the owner needing to sue to recover the funds.

Notably the rules make it clear that adjudicators can only resolve one issue per adjudication, Complex three-party disputes will require creative solutions, including filing and then combining the adjudications.

John Rosenberg of JMR Electric says he hopes the new system will encourage everyone to communicate more openly, and sort out solutions before they force the formal prompt payment and adjudication process. “You are going to have to go back to the past and pick up the phone, and have good honest communication,” he said. “I don’t mean sarcastic emails. It’s all back to relationships, and getting back that way.”

The new rules are for “people who aren’t behaving well,”” said Raboud. “It’s meant to drive cultural change. To deal with change orders in a timely manner – don’t stall you for six months on a change order.” The key is to negotiate efficiently, and it isn’t meant that everything would be adjudicated, he said.