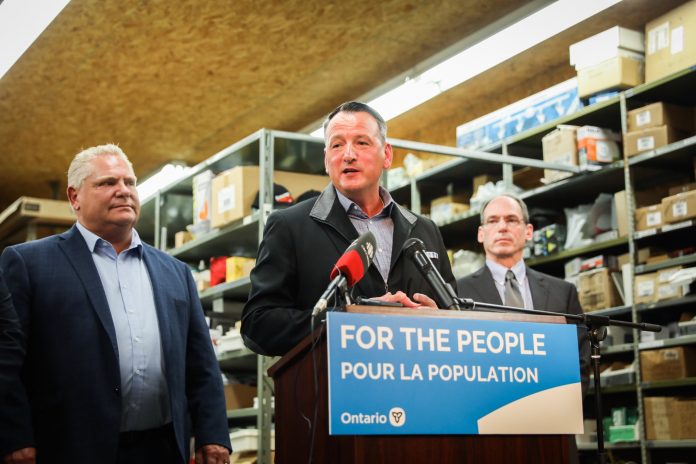 Ontario is spending $5 million to fix potholes and tackle much-needed road repairs in Kenora and Dryden. The money will be used to upgrade Railway Street in Kenora, as well as Van Horne Avenue in Dryden.

“I know many Northerners are fed up about the delays in road repairs in the region,” Premier Doug Ford said at a press conference in Kenora last Wednesday. “Fixing these roads is a matter of safety for Northern drivers, especially when it comes to winter driving. Our government is going to put shovels in the ground, repair our roads, and ensure Northerners can get to where they need to go safely and quickly.”

This project will include full roadway reconstruction of 1.7 km of Railway Street and 10th Avenue South in Kenora, at a cost of about $3.9 million. The project will fix potholes, replace sidewalks, and add on-road cycling lanes and new street lighting to make these roads safer for the community. The combined investment from local and provincial governments is expected to be about $8.7 million.

The provincial government is also investing $1.4 million to fix Van Horne Avenue in Dryden, which will replace the asphalt surface and curbs and repair sidewalks to improve road safety and accessibility.

“Keeping people and goods moving in Kenora-Rainy River and across Northern Ontario is a priority for this government,” said Minister Rickford. “Funding critical road reconstruction in Kenora and Dryden improves our local infrastructure and supports our plan to develop our economy in Northwestern Ontario.”

This upgrade and reconstruction project will improve road safety right across the region and connect people with jobs, and businesses with customers — helping to make Northern Ontario Open for Business.

“We’re continuing to work with municipalities, families and businesses to make smart investments in our infrastructure,” said Laurie Scott, Minister of Infrastructure. “Our investments are supporting job creation and growing the economy for hard-working families in Ontario.”

The announcement of infrastructure funding came as Kenora is wrapping up work on the current phase of downtown revitalization, which includes upgrades to Matheson Street and Park Street. Also, the city declared a boil water advisory late yesterday, due to a water main break in the north end.

In Dryden, $1.4 million will be used for improvements to Van Horne, which connects their commercial core with residential neighbourhoods. The total investment from provincial and local governments is about $3.1 million.

“The City of Dryden is very appreciative of this important infrastructure investment in our community,” said Mayor Greg Wilson, holding up a photo of an old water line that had been pulled from the ground, and describing how clogged it had become.

The combined investment from the provincial and local governments for the project to fix Van Horne Avenue in Dryden would be approximately $3.1 million.