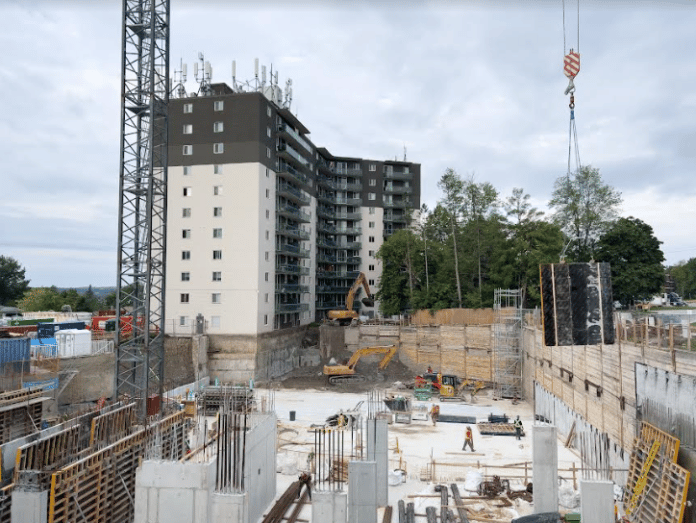 Barrie city council’s decision to deny a noise exemption until 10 p.m. at a highrise apartment construction site will stand.

Construction at Shoreview, an 11-storey rental apartment tower at 37 Johnson St. will have to shutdown at 5 p.m. without the exemption.

Lucas du Mont, property manager with FRAM + Slokker, a Mississauga-based company requested the temporary exemption to extend work hours, but the request was rejected by general committee. Du Mont was to speak at a council meeting last week to appeal the decision. However, he withdrew the deputation request.

“I want to appeal the decision and speak in front of the council as our management and ownership team have followed all the necessary steps, been transparent in our plan and have gone above and beyond to satisfy the surrounding neighbours and the city,” he wrote in his request to speak to council.

A staff report recommended upholding the current noise bylaw was approved by general committee without debate on Nov. 23.

The surrounding area is deemed a quiet zone due to its proximity to a retirement/long term care facility and requires construction noise to stop at 5:00 p.m. Monday to Saturday.

Enforcement Services has received several noise complaints between February 2022 and September 2022, related to construction noise taking place outside of the currently permitted times. Residents have also complained parking around the area and lights on the construction site crane system, however that’s not a direct violation of a by-law.

Also, to accelerate the concrete curing, pours would be done early in the day, formworks below the areas being concreted would be enclosed and heated and an accelerator would be added to the concrete mix.

While the 11-storey tower was turned down by council in 2017, the Local Planning Appeal Tribunal (LPAT) ruled the project is consistent with the Provincial Policy Statement on land-use planning, conforms to the Greater Golden Horseshoe Growth Plan and adheres to the city’s Official Plan. It was approved in October 2019.