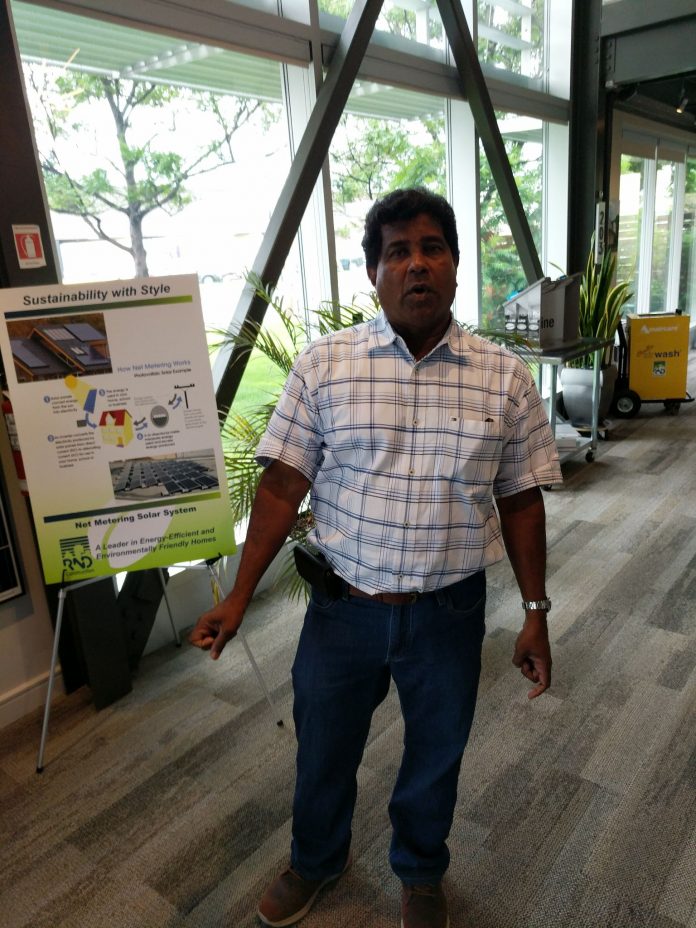 Roy Nandram, president of the Greater Ottawa Home Builders’ Association (GOHBA) and owner of RND Construction Ltd., has a personal background unlike most individuals in Ontario’s construction industry.

In his inaugural speech as GOHBA president at the association’s annual general meeting in April, Nandram described how he grew from a childhood in a Guyana farming village to achieving success as a business and community leader in Ottawa. Here are excerpts from his presentation.

I would like to use the rest of my time this evening to tell you who I am, and how I ended up in Ottawa and how I became a home builder.

I was born in a farming village in Guyana. And came from a very large family of 10 kids. I am number four. My dad was a rice merchant.

When I was about nine years old, the railway company imported two new train locomotives, one named Ottawa and the other, Maple Leaf.

At that time, I had no clue what was the significance of those two names.

The villagers flocked near the railway embankment to see these beautiful machines. It was fascinating to watch. You can imagine my excitement as a little boy.

My friends and I tried to view these locomotives from the train station platform, but we were not allowed to be there.

On one occasion, the station master grabbed me by my shirt collar and dragged me to his office – my friends ran away. The station master shouted: “I am going to call the police who will throw me in jail for loitering” . . . I was really scared!

He then said harshly: “Why are you always at my station?”

I pleaded: “I come here to admire the train engine, and when I grow up, I want to get a job to drive the train.” He exploded with laughter.

Then he gave me the best advice of my life. He said: “If you want to drive the train, you must do well in school, and then go abroad to study mechanical engineering.” He then declared that I was free to go, and I was welcome to his station any time as long as I stood a safe distance from the train. It was a privilege because my friends were not allowed to join me.

Influenced by the locomotives and fast forward to 1976, at the age of 19, I arrived in Ottawa to study mechanical engineering at Algonquin College. It was the fall . . . that is when I discovered the beauty of a maple tree and later I tasted maple syrup at a pancake breakfast.

Today, maple is still my favourite wood for flooring and cabinets and in memory of my late parents I planted two maple trees at Vincent Massey Park, at a place where we hold our annual family picnic.

Nandram introduced his family members to the GOHBA audience.

After my first year at Algonquin College, I had little money left and contemplated returning to Guyana. I had to find a job. Then one of my roommates introduced me to Kanny. Kanny owned the Chinese Village Restaurant next door to our rooming house on Rideau Street. He offered me a part time job to dishwashing and delivery of Chinese food.

At $2.85 per hour, this was still my best job ever – no travelling time, and a free meal with every shift. I learnt how to use chop sticks and to cook some Chinese food. I also gained knowledge of the city streets without Google maps. I also received tips for my delivery service. This is how I was able to cover the cost of my college education.

I later found out that Kanny owned some apartments around the downtown core and he had a few staff members doing maintenance and renovations. In the summer, I joined the team as a job site helper and gofer. I was doing the pick up and delivery of building materials, using the restaurant delivery car with a Canadian Tire trailer attached.

Kanny continued to give me more responsibilities – and this while I was perusing my college education.

One evening in 1982, Kanny called me to his office. This one-room office was located in the basement under the restaurant kitchen. Kanny told me that he had just purchased an in-fill property and we were going to build a condominium building. My first question (was): “What is a condominium?”  He then explained the concept of apartment ownership, though this did not make sense to me at that time.

Then he said: “We are not going to hire an architect and you will be doing the planning, designing, manage construction and marketing.” I thought that he was out of his mind. I had zero knowledge of such processes except that I could do mechanical drawings that I had learned in high school and at Algonquin.

Then, without hesitation, I said “OK, I will give it my best shot.” Kanny saw something in me that I could not see in myself. I thank him for that.

I spent the next two weeks at City Hall, where I visited all the departments, trying to learn the planning and permit process while making connections with city staff.

It was a very difficult process for me. Let me tell you why.

Just imagine what I looked like in those days:

It appeared impossible for anyone at City Hall to take me seriously.

Not withstanding all those obstacles, I was able to obtain a building permit in six months with only one consultant on board – a structural engineer. Our first project, a 12 unit condo with one level of underground parking, was sold out before completion. This project involved site plan control, demolition control, Committee of Adjustment for variances, and obtaining heritage and design committee approval (streetscape analysis).

I had to learn and navigate these requirements very quickly.

Over the next six years, we completed 180 condo units in nine infill sites, a 40,000 sq. ft. office building, and we designed and built severn restaurants, two of which still exists today – the Brigs in the Market and Lieutenant on Elgin Street.

In 1987, one of our condo buildings won an Ottawa Carleton Home Builders’ Association (previous name for the GOHBA) award and another won a City of Ottawa Heritage award in 1988. I am proud to let you know I still own a three bedroom condo in our last building constructed in 1989.

In 1989, the economy took a downturn and Kanny did not want to take the risks of starting a new project.  So he decided to retire from the condo business. I took a short break and then started RND Construction in 1990.

By now you probably realize that I have no issue with challenges.

This past January, I was invited as a guest lecturer to the Sustainable Architecture students at Algonquin.

During the Question and Answer session I was stumbled with the last question of the day: “In one word, how would you describe yourself?” It felt like I was at a job interview.

After some thinking I answered “Unique”.

On my drive home, I tried to find other words by recalling what other people say about me:

This combination is unique.