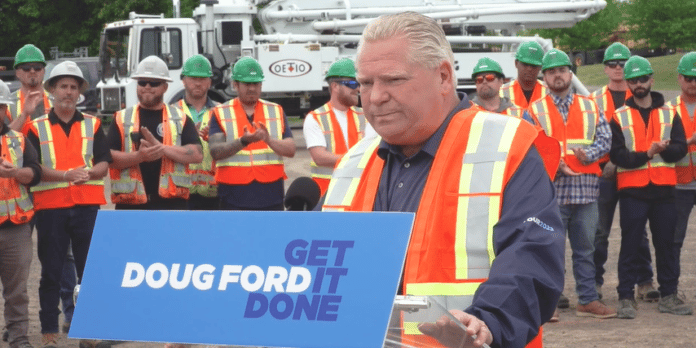 Facing a CUPE strike that closed schools and growing pressure from unions across the province, Premier Doug Ford rescinded Bill 28 on Monday.

The legislation allowed the government to invoke the Canadian Charter’s notwithstanding clause, denying educational support workers the right to strike.

Trade unions that supported Ford in last spring’s provincial election were among the voices demanding Bill 28 be repealed.

“We are deeply concerned about the potential removal of collective bargaining rights impacting educational workers,” Marc Arsenault, business manager of the Provincial Building and Construction Trades Council of Ontario, said in a statement last week.

“Collective bargaining is a fundamental right of working people that has been repeatedly upheld by the Supreme Court of Canada and is enshrined in the Charter of Rights and Freedoms. We strongly encourage both sides — CUPE and the government — to continue negotiations in good faith in the pursuit of a fair contract that benefits everyone.”

The council represents 150,000 workers across Ontario and five of the eight trade unions that endorsed Ford and supported his government’s re-election to a second, majority term. The five unions are: The International Brotherhood of Electrical Workers Construction Council of Ontario, the International Union of Painters and Allied Trades, the United Association of Journeymen and Apprentices of the Plumbing and Pipefitting Industry, the Ontario Pipe Trades Council and the International Brotherhood of Boilermakers.

Ontario federation of Labour, CUPE, OPSEU and Unifor in opposing the bill.

Introduced this week by the Ontario Government and expected to pass Thursday, Bill 28 would make strike action illegal, though CUPE announced this week that workers would walk off the job Friday in any case.

Bill 28 imposes an agreement on the CUPE members, who are not deemed essential workers, and sets out fines for  the union and individual workers who walk of the job.

While the government directed school boards to do “everything possible” to keep as many schools as possible open with CUPE workers on strike, many boards have announced closures.

The Union of Operating Engineers also called for withdrawal of the bill, which it described as a huge overreach.

In a statement released on Nov. 2, the union called the legislation, “a huge overreach that will have lasting impacts on unionized workers across the province,” and urged the province to repeal the bill immediately.

“The International Union of Operating Engineers and its Local 793 are categorically opposed to Bill 28 and any attempt by the Government of Ontario to undermine the collective bargaining rights of workers, including the right to strike which is a necessary and fundamental right of workers in Canada,” said Local 793 business manager Mike Gallagher.

“To be clear, the International Union of Operating Engineers is opposed to ‘back to work’ legislation and any legislation that undermines the rights of working people to the collective bargaining process and the right to strike, if required,” said the union’s Canadian Regional Director Patrick Campbell. “The Ford Government’s Bill 28 represents a clear and present danger, not only to the lowest paid education workers in Ontario, but to all Canadian workers moving forward if this legislation stands.”

“The threat of resorting to using the notwithstanding clause when it becomes politically expedient is not a road the Premier needs to go down.”

Ontario construction unions that endorsed the Progressive Conservative Party for re-election include two of the largest in the province, LIUNA and the International Brotherhood of Electrical Workers. Spokespersons did not immediately respond to a request for comment

Trade unions in endorsing the Ford campaign said his government’s focus on building homes and infrastructure and boosting skills training is in keeping with their priorities, although Labourers’, international vice-president Joseph Mancinelli, who has written Lecce calling for withdrawal of Bill 28, said in May that he disagreed with some of Ford’s policies including Bill 124 which curtailed wage increases for public sector workers.