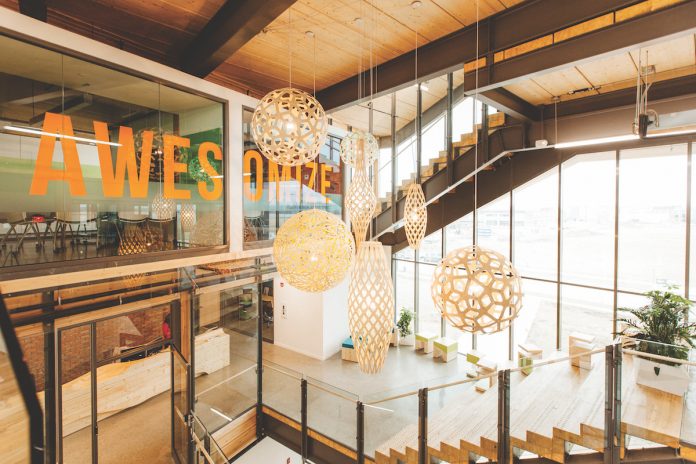 There are exciting opportunities in sustainable construction, with ambitious goals to reduce the built environment’s environmental drain – creating billions of dollars of potential opportunity for new construction projects and retrofits of existing structures.

These ambitious ideals are reflected in both big picture and immediately practical initiatives from Sustainable Buildings Canada (SBC), based in Toronto.

SBC executive director Mike Singleton says architects, engineers, contractors and developers are setting sustainability energy efficiency targets well above the Ontario Building Code (OBC) – which itself will has been projected to move to a near Net Zero or even Net Positive energy consumption this decade. (This means that the buildings would need almost no energy from the power grid or would contract for renewable energy if they did and in some cases can actually contribute to it.)

“I can see, particularly in the last few years, the interest in climate change, the understanding of it, and that it is on everyone’s radar,” Singleton said. “And (that interest) is getting pushed down to developers, building owners and operators, and government – municipalities in particular.”

The new standards are reflected in current building design and construction practices. Examples are programs such as the Canadian Green Building Council’s (CaGBC) Leadership in Energy Efficiency and Design (LEED) and the new Toronto Green Standard which is moving developers towards greater levels of environmental performance. As well, designers and developers are engaging in programs such as Enbridge Gas’s Savings By Design Program – where experts and designers gather in design charettes and collaborative meetings to consider ways to improve energy efficiency and lower costs at the design stage – resulting in energy savings improvements of at least 15 per cent beyond OBC requirements.

But Singleton says the biggest challenge – and the greatest opportunity for massive improvements – will be in retrofitting  existing buildings. The work here could create a multi-billion dollar industry once early projects currently in the planning stage prove to be viable.

“I like to remind people that, yes, it’s great to build a LEED Platinum building for example, but we’re only going to build a handful of those. And we’ve got thousands of existing buildings – and the big challenge is how do we deal with the energy use of these existing buildings?”

Social housing is the ideal place to start this kind of program because there are “a large number of units under the current standards in need of repair, with few owners,” Singleton said.

He said SBC learned about the concept in the Netherlands, where 100,000 townhouses are owned by four or five housing providers.

There, private constructors discovered over a 10 year period how to perfect the process of building pre-fabricated assemblies “with the windows and doors in place and the doors in place including a unitary heating/water heating system — the units are delivered to the site and installed in as little as a day.” The system reduces energy consumption by upwards of 50 per cent, includes a solar pv system on the roof which off-sets much of the remaining energy use and tenants don’t experience serious dislocations while the retrofits are installed.

SBC hopes to replicate the process in Ontario, though it initially won’t be inexpensive. The anticipated cost for the retrofits of townhouse-style units here would be $150,000 to $200,000 per unit at the outset, with an energy savings payback within about 30 years – in part because energy is still relatively inexpensive in Canada compared to Europe.

(Of course the retrofits would also extend the lives of the existing structures, and the actual cost would be far less than the ultimate option of tearing down and rebuilding the units.)

Singleton estimates that the costs could be reduced by 50 per cent with mass production and efficiencies, reducing the pay-back time accordingly.

Overall, he estimates there are about 250,000 social housing units in Ontario that could qualify for the retrofitting. Assuming the average cost can be brought down to $100,000 – there would be a $25 billion market opportunity, with direct energy savings payback in 10 to 15 years. Ultimately the concept is that “avoided cost” of the energy will pay for the cost of the retrofit.

Singleton said SBC is working with social housing owners providers and government funding agencies for an initial 60-unit project. He declined to name the likely funding source since negotiations are still-underway, but obviously it will still be a significant project requiring an $11 to $12 million investment.

(While the current Ontario Progressive Conservative government has put the brakes on  funding climate change projects, federal funds are available. For example, the Canada Infrastructure Bank (CIB) has expressed an interest in providing financial backing for this sort of initiative.)

Once the initial project proves its value, Singleton anticipates it could scale up with government funding, private sector innovations, and cost reductions based on volume and experience.

Of course, beyond the social housing initiative, there are many things that need to be done to enhance sustainability and reduce greenhouse gas emissions.

“For new buildings, the construction boom in the GTA has strained the supply channel,” Singleton said. “Developers who may wish to undertake high performance buildings may not have the time to investigate what is involved. There is still a disconnect between the developer who wishes to minimize construction costs and the eventual owner who may wish to minimize operational costs.”

“There is a construction trade s labour shortage which appears to be getting worse,” he said “An outcome of that reality is that pre-fabrication is starting to gain momentum in the market. It brings certain advantages including cost reductions, less construction waste and less exposure to on-site risk associated with weather events and security..

“We are big supporters of integrated design, wherein sustainability, energy performance and other features are ‘designed in’ to buildings, not retrofitted once the design is almost complete. There are significant synergies that can be captured though the use of integrated and smart designs.”

SBC offers a diversity of training courses and programs, white papers on sustainability, and an annual Green Building Festival (this year on Oct. 8 in Toronto) to enhance the knowledge and collaboration behind sustainable construction.

Singleton said he is excited about the progress in sustainable building and the fact that “green building and sustainability is on everyones’ radar now.”

“But there’s still a lot to do,” he said. “And that’s our challenge – climate change is a bit scary, what’s already happened happening and the fact that the climate has already changed.”

“We see that every year with the flooding, extreme temperature fluctuations and weather related events such as forest fires and extremely hot stuff. So the question for everyone is what we can do about it in a more intensive way.”

For more details regarding SBC’s Oct. 8 Green Building Festival in Toronto, visit www.gbf19.com. This year’s theme is ‘Simple Versus Complex: Building in a Changed Climate’. Continuing education units are available.