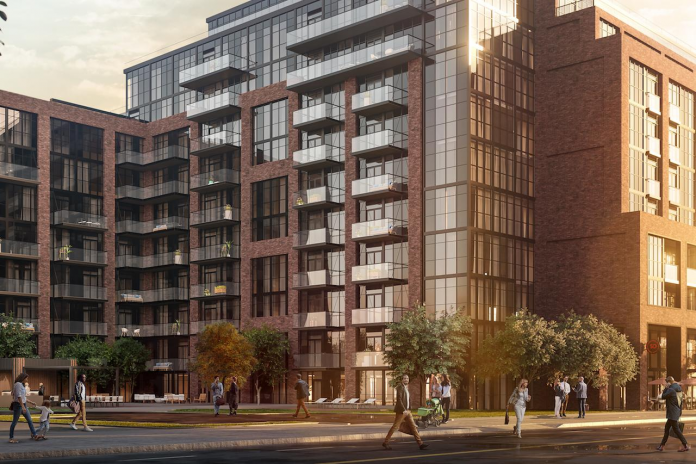 The Stockyards District Residences projects will contribute to the transformation of what had been a working-class district to an upscale neighbourhood,

“Marlin Spring is proud to contribute to the ongoing renaissance of Stockyards,” said Marlin Spring vice-president of land development and acquisitions Pedro Lopes at the Aug. 13 groundbreaking of the project being built in partnership with Greybrook Realty Partners, Real Estate News Exchange (RENX) has reported. “This is infill housing at its finest.”

“The building architecture is informed by the industrial heritage of the neighbourhood and, as a result, many of the suites offer unique floor plans so many buyers will live in a true custom suite,” Marlin Spring chief executive officer Ben Bakst told RENX.

The sales agency for the project reports that it essentially sold out in less than six months, with prices ranging from the mid $400,000s to more than $1.4 million. These prices don’t include parking (at $50,000) and additional storage space (add $6,000).

The area west of Keele Street and just north of The Junction has extensive new retail stores, as well as parks, schools, easy access to public transit, and a good Walk Score, w
Marlin Spring is preparing to develop another property a few doors west of Stockyards District Residences. “The Stockyards is a wonderful neighborhood and we have continued interest for opportunities in this area,” Bakst told RENX.

“There’s an interest now to redevelop this area,” said Ward 5 York South-Weston councillor Frances Nunziata. “Unfortunately, the planning staff is a little bit slow and we’ve got to push them. But, we’re beginning to realize that there’s so much potential in this area.”

The environment around the Stockyards District Residences has certainly changed. New York Pork formerly occupied the land – and neighbouring residents complained about pigs wandering onto their lawns until the business was destroyed in a fire more than a decade ago, RENX reports.

Marlin Spring and Greybrook purchased the empty site in 2017 for an undisclosed price.
“I can’t wait until this building is built, and I’m hoping that we can get more development along St. Clair and this area where we have vacant employment lands that I believe we should rezone to residential,” said Nunziata.

Toronto-based Marlin Spring has acquired more than 30 residential projects and more than 8,500 units in various stages of development, construction and repositioning across Canada and the United States. Its portfolio has an estimated completion value of more than $4 billion, with more than eight million square feet of residential density.

The Toronto-based firm’s portfolio totals more than eight million square feet of residential density with an estimated completion value of more than $4 billion.

Greybrook is a Toronto-based asset management firm that invests in real estate development and value-add assets. The firm and its affiliates have invested in more than 70 projects across Canada and the U.S.

“Stockyards District is one of many projects that Greybrook and Marlin Spring are partnered on, and it’s a great example of our collaborative partnership and strong execution abilities,” Greybrook CEO Sasha Cucuz told RENX.