The on-again, off-again strike action by 12,000 plumbers and pipefitters across Ontario will likely be “on again” after United Association (UA) union members voted at special meetings Thursday afternoon on a final offer from the Mechanical Contractors Association of Ontario (MCAO).

In Toronto, UA Local 46 members voted 99 per cent to reject the contract offer, the UA local reported on its Facebook page.  Overall, the Ontario Pipe Trades Council (OPTC) reported province-wide that 96.02 voted to reject the offer, with 4,495 ballots cast.

The union says it will be in a strike position as early as midnight. 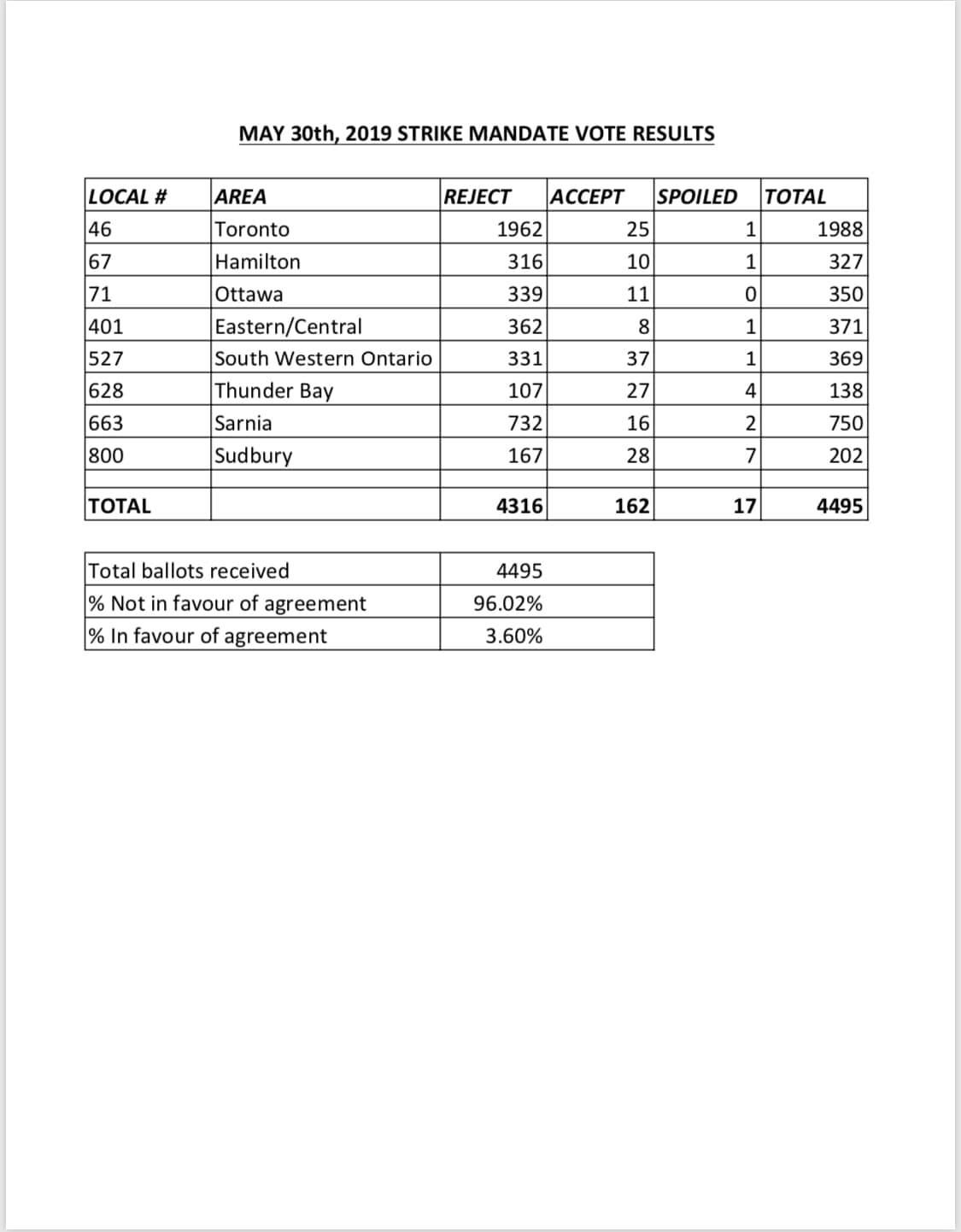 The workers, represented in bargaining by the OPTC, had originally planned to walk off the job Tuesday morning as employers continue to push for a 40 hour work-week and the right to “name” employees anywhere in the province.

However, MCAO negotiators at the last minute presented a final offer and made clear that Ontario labour law requires this offer to be presented to the union’s membership for a vote before a strike could commence.

Many plumbers and pipefitters, not knowing if they would be working or not on Tuesday, had followed the union’s recommendation to take their tools home at the end of their Monday afternoon shifts.

Toronto Local 46 officers said in a memo to members on Wednesday that the OPTC bargaining committee put the strike on hold for 48 hours “to confer with legal counsel as to our position on the contractors’ offer.”

“During that time it was decided to hold a ratification vote forced upon us by the contractors final offer proposal,” the union leadership said in its memo.

However, Local 46 officers and representatives of the OPTC say they want members to reject the proposal.

“It is of the greatest importance that we have all our ICI members show up to the meeting on Thursday May 30 at the International Centre to REJECT the contractors offer on voluntary 40 hours,” the union officers wrote. “This has never been endorsed or agreed to by your bargaining committee, as it would only succeed in dividing our membership.”
In a separate memo, the OPTC said that “it is the recommendation of both the OPTC negotiating and steering committees that your vote to reject the contractors final offer, thus mandating the negotiating committee to resume negotiations and if necessary authorize a province wide strike in the ICI sector as early as midnight, Friday, May 31 2019.

“It is imperative that all members attend to once again send a strong message to the contractors that our core values cannot be negotiated away.”

Employer bargaining agencies for the plumbers and pipefitters, sheet metal workers and other trades have mounted what appears to be a concerted initiative to roll back the unions’ power to select and assign employees to job sites from local hiring halls. As well, the employers are seeking to revert to a 40 hour work-week from the present 36 hour week in the province’s major centres, such as Toronto and Ottawa.

Meanwhile, the Sheet Metal Workers’ Union sent out a lengthy memo on Wednesday, titled “The line in the sand”.

“Your negotiating team met with the Sheet Metal Contractors’ Association again on Monday May 27 and Tuesday May 28,” the union’s negotiators reported. “We have made significant progress on most of the outstanding issues. However all of this progress has been accomplished by your negotiation team in the face of significant obstruction by some members of the contractors association.

“Finally, the contractors association continues to refuse to abandon their demands for concessions. These demands still include the following:

1. Working for more hours per week without qualifying for overtime pay;
2. Company control over our hiring halls;
3. Control over hiring so they can move employees across the province without the need to hire local members.

“Today they want to go after our hiring hall and pay us less for more work. Next time they will go after your vacation pay and cut your wages. We cannot let them get away with this.

“The wages and benefits we earn today are based in large part on the sacrifices of our parents and grandparents who fought on the job sites, in the union halls and the picket lines so that our children and grandchildren could have the opportunity at a decent future.

“This strike is the LINE IN THE SAND. We must stand together and stop the contractors from undermining all that our unions have built. This strike is not just about the never ending demand for concessions. It is to honour the sacrifices of the past and protect our children and grandchildren in the future.

“Your negotiation team remains ready, willing and able to finish negotiating a reasonable settlement that will maintain existing hours of work and a democratic local hiring hall all at a fair wage.”

“Once again we extend our thanks to our members and their families for their support on the picket line, at the union meetings and in our communities.”