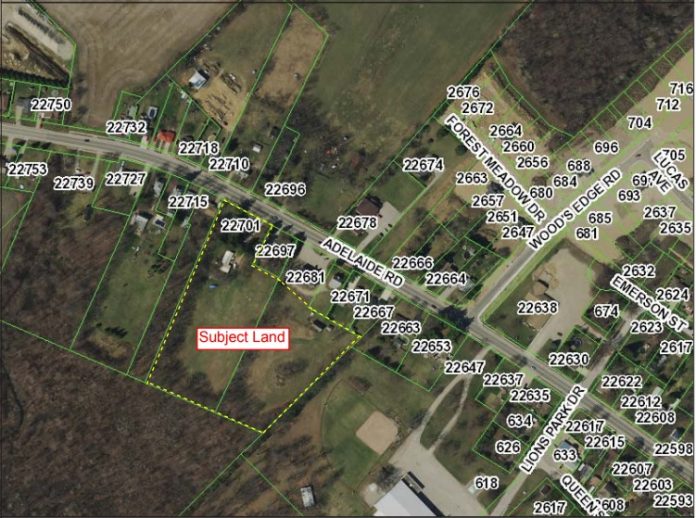 Strathroy-Caradoc’s municipal council has taken an important task in deciding how to move forward in extending water and sewer service farther down Adelaide Road into Mt. Brydges.

The issue arose out of an application council’s committee of adjustment considered in its April meeting, to sever off a commercial building from a lot so that the remainder of the lot could be prepared for further residential development. The committee gave conditional approval for that severance; one of the conditions was that municipal servicing be extended to the subject lands at the owner’s expense.

Estimated cost for this extension of services, which includes the extension of water, sanitary and storm services from 22678 Adelaide Road to 22708 Adelaide Road, as well as improvements to curb, gutter, sidewalks and catchbasins along the east side of the road, comes in at $445,000. The expense will be covered by 100 per cent security until the work is done.

Further to that, there will be costs associated with hooking up existing homes to the water and sewer extension, estimated to come in at $50,000. That cost will be funded from the wastewater capital reserve fund and through a sanitary connection fee. Matthew Stephenson, director of building and waste services at Strathroy-Caradoc, suggested that this portion of the discussion would take some care in future meetings, because the connection fee which council sets for homeowners will be setting precedent for hook up to servicing going forward.

The plan requires ripping up the centre of Adelaide Road in Mt. Brydges for a period of about 2 months. Stephenson said the developer is eager to get started one all the necessary permits are established through the Ministry of the Environment, and that the estimated start date might be September of 2019.

Councilors pointed out that careful consideration will need to be paid to traffic flow in the area, since traffic flow that’s diverted from Adelaide during this construction work will likely wind up in other areas which are already experiencing development of their own.