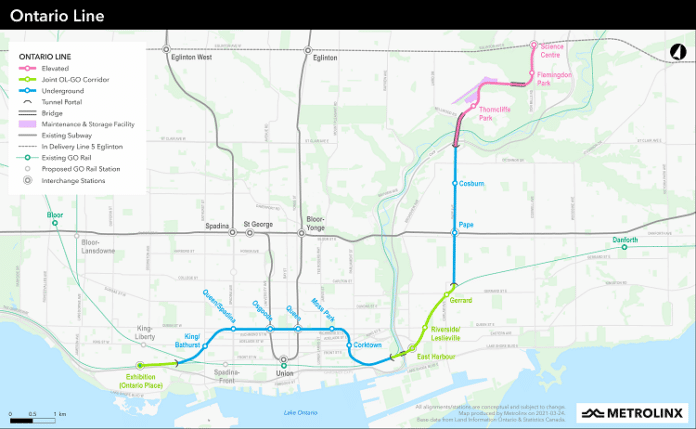 Construction is set to begin on Adelaide Street in Toronto next week and will continue through the winter, in preparation for the Ontario Line subway extension that will run along Queen Street.

The City of Toronto announced Thursday that the construction crews will be working from Bathurst Street to Parliament to upgrade critical water, road and cycling infrastructure, as well as to reinstate TTC streetcar tracks in advance of Ontario Line construction.

“The project, in coordination with the TTC and Metrolinx, bundles several construction needs on Adelaide Street into one project to complete the work as quickly as possible and minimize prolonged disruption,” the city stated in a press release.

A section of Queen Street will be closed for several years while the subway extension is built.

The Ontario Line, a 15.6-kilometre, 15-stop extension will extend from Exhibition Place through the downtown core along Queen Street, running above ground to join an existing GO train track near the Don River and continuing north along Pape Avenue to the Ontario Science Centre.

Adelaide construction will include:

Construction is anticipated to be completed in spring 2023, however, lanes may re-open during winter months and close again in early spring, according to the news release.

“With so much construction taking place in the downtown core, drivers are advised to plan their travel in advance, expect delays, consider taking public transit and obey signage around work zones for the safety of the work crews.”

Limiting the amount of tunneling and excavation needed for the project reduces its complexity and the time it takes to build it, Metrolinx said in a statement.

This will be done by building the Ontario Line within sections of existing Metrolinx-owned GO rail corridors in the western (Exhibition) and eastern (East Harbour to Gerrard) segments of the line, which has the added benefit of reducing the number of construction and property impacts in surrounding neighbourhoods.

In the northern segment between Thorncliffe Park and the Science Centre, the trains will run along elevated tracks that will be mostly situated along local roadways, which are generally wider there than in other parts of the city and can accommodate this kind of infrastructure more easily.