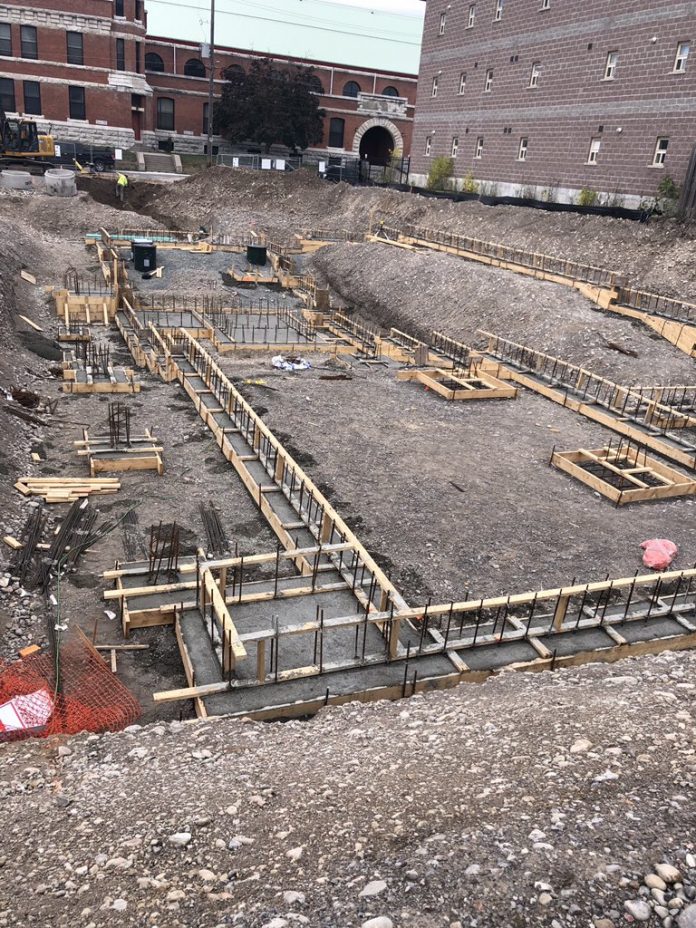 Work has started on the new Brock Mission men’s shelter on Murray Street in Peterborough, but a skilled labour shortage may affect construction time.

The former building was torn down in late 2017, but construction was delayed for about a year after a redesign was ordered from Lett Architects to bring the project cost down to budget.

The facility is expected to cost $6.3 million to build and will include 30 emergency beds and 15 small rental units.

The city asked for $5.3 million for the project from the federal government and received a $2 million grant along with a $3 million repayable loan, leaving fundraising to cover the $271,000 shortfall in funding.

Construction of the new shelter was supposed to start last summer, but at the time, the project was more than $3.2 million over budget with costs ballooning to $10.7 million. That prompted city council to put the project on hold until costs could be cut.

The project was re-tendered last fall with a new design and, in April, a fundraising campaign to support the shelter build was more than halfway to its $2 million goal at $1.2 million.

The redeveloped shelter will include 15 new affordable units and 30 shelter beds for homeless and at-risk men.

“Addressing housing and homelessness in our community will solve many of the other challenges we face,” stated Maryam Monsef, Minister of International buy accutane on ebay Development and Minister for Women and Gender Equality.

“That’s why our government has invested in Canada’s first 10-year National Housing Strategy. My team and I have been working with several local groups to support building housing locally. Our efforts to reduce poverty and grow the economy are working because we are relying on the expertise of communities.

Mortlock Construction has an average of 10 skilled trades workers on the mission site, but at the height of construction, there will be upwards of 40 workers needed. The contractor says finding skilled workers in the area is an ongoing challenge.

“We’re in a position where there is demand for these people and not enough people to fill the roles,” Craig Mortlock, vice-president of Mortlock Construction told the Peterborough Examiner.

Mortlock Construction is in nearby Cavan Monaghan Township. The medium-sized firm, which opened in 1947, employs around 40 people regularly, but often subcontracts for skilled labourers for its projects — such as The Brock Mission rebuild and the now complete Hospice Peterborough.

The company often looks for carpenters, labourers, site fore people and site supervisors for its projects and Mortlock says recruitment is difficult for physically demand work.
Workers to bigger centres, and business experts suggest changes to training regulations in the trades could help ease worker shortages.

The goal is for the new building to be open by around December 2020.