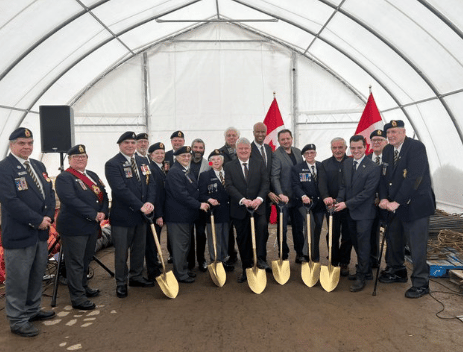 More than $130 million has been announced for construction of more than 380 affordable housing units. These units will house Indigenous peoples and veterans and will provide varying levels of accessibility and affordability.

The first project will be operated by Royal Canadian Legion Branch 25 in Sault. Ste. Marie replacing the existing building with a nine-storey accessible tower with 107 units – 30 percent affordable. The building will have a restaurant, meeting rooms, a hall and a gathering place. This project received $ 32.1 million in federal funding through the National Housing Co-Investment Fund (NHCF) and $1.9 million from Veteran’s Housing Ontario Inc.

“I am pleased to see the strong relationships we have built with all levels of government and Indigenous partners including Ontario Aboriginal Housing Services lead to such positive results,” said Steve Clark, minister of housing.

The second group of nine projects will be owned and operated by Ontario Aboriginal Housing Services (OAHS), serving communities across Ontario, creating 276 affordable units to support Indigenous peoples. Projects will receive nearly $ 87 million in federal funding through the NHCF. Approximately $3.7 million has also been committed through the Ontario Priorities Housing Initiative (OPHI) bilateral agreement to build 45 units in Sault Ste. Marie and London, as well as $7.2 million from OAHS in the form of land and cash equity.

The National Housing Co-Investment Fund (NHCF) is a program under the National Housing Strategy (NHS) that gives priority to projects that help people who need it most, including women and children fleeing family violence, seniors, Indigenous peoples, people living with disabilities, those with mental health or addiction issues, veterans, and young adults.

“We are supporting of the needs of Indigenous Peoples, veterans, youth, and women and their children in Sault Ste. Marie and other communities across the region,” said Ahmed Hussen, minister of housing and diversity and inclusion. “This funding will make it possible for hundreds of Indigenous people and veterans in Ontario to access new homes, taking a crucial step towards addressing the need for affordable housing in these communities.”

The OAHS’ Sault Ste. Marie project consists of 52 units that will be jointly managed by research and advice to all levels of the Canadian government, consumers and the housing industry. CMHC’s aim is that by 2030, everyone in Canada has a home they can OAHS and the Métis Nation of Ontario.

As Canada’s authority on housing, CMHC contributes to the stability of the housing market and financial system, provides support for Canadians in housing needs, and offers unbiased housing afford and that meets their needs.

“The Royal Canadian Legion Branch 25, its Property Development Committee chaired by Col. Clyde Healey, and every veteran and member within our area, thanks all of the government agencies responsible for getting us to this place,” said Helen Stewart, president, Royal Canadian Legion Branch 25 – Sault Ste. Marie. “We believe that this project will allow us to service veterans and the community for many years to come.”