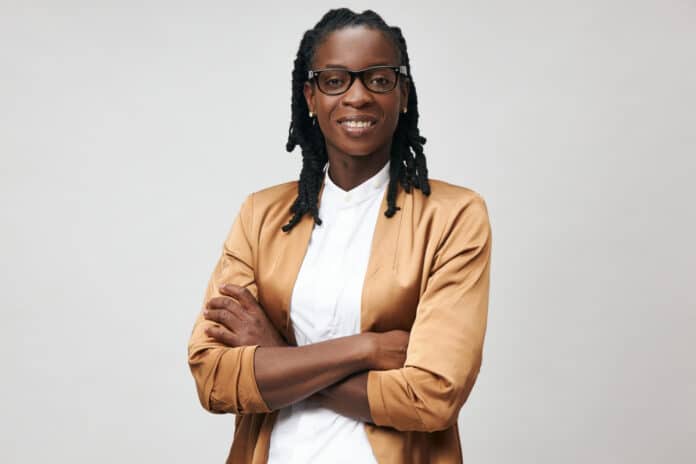 Little did Carpenters’ District Council of Ontario (CCDO) representative Mulisius Joe suspect nearly 13 years ago when she became a carpentry apprentice through a job fair that her work would be so critical to the growth of the Canadian economy.

“Never in my wildest dreams would I have ever thought I would be in this position,” said the outreach and recruitment co-ordinator who apprenticed with Carpenters Local 27 in Toronto.

She spent 10 years doing construction work including general carpentry, often as the only woman onsite, before taking on her current role. “It’s been a learning curve but I’m just trying to put my best foot forward because I realize what this could potentially mean down the road.”

Joe, or MJ as she is known, now works with all genders, youth, students, minorities, the disabled and with contractors as part of a broader effort to tackle a construction labour shortage that threatens to derail a government push to make life more affordable by building more housing and infrastructure across the country. Her aim is to recruit new apprentices in trades such as carpentry, drywall and flooring, particularly those from groups traditionally underrepresented in the industry.

The idea is to attract apprentices now, when they’re young in many cases, so that by the time the four-year training is up “there will be a shift in the culture in the industry.”

With Statistics Canada forecasting a huge wave of retirements over the next decade, “we can’t find enough people now,” MJ said in an interview with Ontario Construction News. “This program is trying to fix that. It’s not going to be overnight. It’s a long-term game.”

Change is happening; there are now more than 200 women among the nearly 9,000 members of Local 27 compared to just a handful a few years ago, she said. But there is a long way to go.

Recent data in the U.S. compiled by the Bureau of Labor Statistics and others found women comprise 10.9 percent of the construction workforce, up one per cent in two years, but only 2.5 per cent of trades in the field.

Some advocates for a more diverse construction workforce have proposed enforceable workforce targets  but  efforts by the Carpenters’ Union focus on outreach, support and networking while attempting to create a workplace culture that is more welcoming to women and other underrepresented groups.

MJ is also using digital platforms and social media to connect with people who may be considering their career path.

“I reach out and let them know that this is a great career to get into. Everything will be taught. It’s 90 per cent working, 10 per cent in the classroom. After four years you’re going to get out with no significant debt.

“All of your skills are transferable. You can use them on the weekend if you want to do a side job. You can go the route of becoming an entrepreneur. You’re going to have great benefits, great pay, a great pension. You could become a foreman. You can become a training coordinator, you can become a business rep. There are so many different avenues you can take.”

She also said work sites have become far more diverse in recent years: “When I go to a meeting I’m just amazed at how many women are in the room from different ethnic backgrounds. It’s grown so fast.”

And site managers are keenly aware of the need to ensure a culture that is free of discrimination and harassment, MJ added. “Keep your eyes open. If you have an issue, speak to your foreman and they’ll address the issue.”

Another key and growing part of her work is to function as an intermediary for a program that provides financial incentives to employers to take on and retain apprentices in eligible trades, particularly those from underrepresented groups.

The $37 million federal government funded national program is targeted at small and medium-sized enterprises who are provided with incentives to  hire first year apprentices payable if the worker stays on the job a minimum of four weeks. MJ said most of the Carpenters Union signatory contractors had signed up, 31 in Ontario, though the program is open to non union contractors as well.

The program provides $5,000 for taking an apprentice and an additional $5,000 if that apprentice is from an “equity deserving” group such as a woman, an Indigenous person, a person with a disability, a visible minority or a newcomer to Canada within the last 10 years. Individuals and contractors can find more information about the Apprenticeship Service Program  ubc-asp.ca. Those who would like more information can contact her at mjoe@thecarpentersunion.ca.

MJ also noted individuals can sign up for apprenticeships at the Local 27 training centre in Woodbridge every Tuesday if they provide documentation including photo I.D.