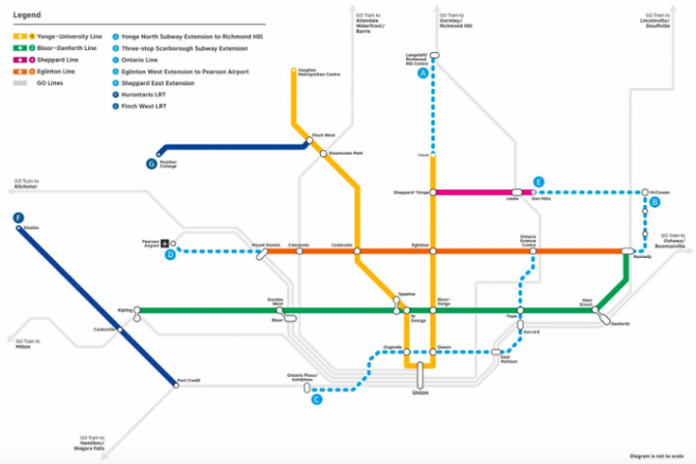 The City of Toronto has come to an agreement with the provincial government to retain ownership of the subway system and secure funding for transit expansions, Mayor John Tory has announced.

According to a news release, the city will receive almost $30-billion for new transit and existing transit systems will continue to be “owned and operated” by the city.

In a report released on Wednesday, the city and the Toronto Transit Commission (TTC) say they have examined the benefits of the Ontario Line and Line 2 East Extension.

The TTC and city officials have agreed to collaborate with the province with a goal of advancing these priority projects as well as the Yonge Subway extension and Eglinton West LRT, with city council’s support.

The province will also pay for the Ontario Line without contributions from the city. The subway line will be designed to relieve overcrowding on subways and will reach underserved neighbourhoods including Thorncliffe Park and Flemingdon Park.

“The detailed report released today from our city and TTC staff makes the case for why city council should pursue this plan, why it’s a good deal for Toronto residents, especially those who use transit, and for the city’s long-term finances,” said Tory.

The mayor also said leaving the subway system under city ownership was a key requirement of council.

The report concluded that more than $5 billion of city cash will also go to addressing “the state of good repair” on existing systems and other transit expansions.

“The importance of this historic capital investment in Toronto’s transit infrastructure cannot be overstated,” Councillor and TTC chair Jaye Robinson said in a statement.

“Without this funding, we would be looking at a growing state of good repair backlog and list of unfunded capital needs, eventually leading to service delays, declining reliability and, eventually, concerns for passenger safety.”

In a statement, Consulting Engineers of Ontario (CEO) said is pleased to hear that the city and provincial governments have agreed to deliver billions of dollars of transit projects in Toronto, including the Ontario Line.

CEO consistently advocates for informed infrastructure investments and its benefits to the Ontario economy, the statement said. “The benefits associated with the certainty of large-scale funding for a robust transit plan will not only have a positive effect on the City of Toronto, but will boost Ontario’s economy, employment rates and will accommodate for projected population growth.”

“Consistent infrastructure investment dedicated by all levels of government will create the transit system that has been in high demand from the City of Toronto and the GTHA,” said Bruce Matthews, chief executive officer of CEO. “The commitment to the various Toronto transit projects and building infrastructure while providing best lifecycle value will be a positive step forward in investing in Ontario’s prosperous future.”