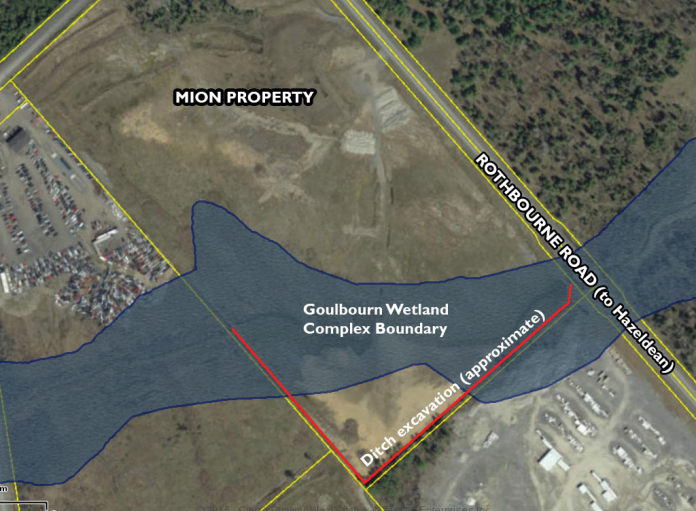 Thomas Cavanagh Construction Ltd. (TCCL) has been ordered to remove illegally dumped fill and to rehabilitate damage caused in a regulated area, after the company pleaded guilty to two charges in Ontario Court.

Charges under provincial law were for illegally placing and removing material and carrying out site grading within and adjacent to the Goulbourn PSW (Provincially Significant Wetland) Complex west of Stittsville. The pleas were entered on Sept. 18, for the ‘unlawful development’ within a provincially significant wetland (PSW).

Written permission is required from the conservation authority prior to conducting work in a regulated area. The Mississippi Valley Conservation Authority (MVCA) is responsible for issuing permits under Ontario Regulation 153/06 which regulates development and interference within floodplains, wetlands, shorelines and watercourses.

Provincial regulations are in place to safeguard the public and development against the risks associated with naturally occurring hazards such as flooding and ensure sustainability of their ecological values and services.

With the guilty pleas, Cavanagh Construction has been ordered by the Ontario Court of Justice to clean up the area. The company was also hit with the maximum fine of  $10,000 for each of the two charges.

The order also includes a donation of $50,000 in 2020 and 2021 to the Mississippi Valley Conservation Foundation – money to be used for the “conservation and protection of wetlands.”

TCCL was convicted of two offences of discharging or permitting the discharge of material into a watercourse that may impair the quality of water, contrary to s. 30(1) of the Ontario Water Resources Act, R.S.O. 1990, c. O.40, and two charges of failing to notify the Ministry of the Environment of those two discharges, contrary to s. 30(2) of the same act.

According to the court ruling, TCCL argued that fines were excessive, and the sentencing judge and appeal judge “ought to have weighed the aggravating and mitigating circumstances differently.”

However, Justice Pardu ruled that “TCCL has not shown that the sentencing judge or the appeal judge considered any irrelevant factor or failed to consider any relevant factor. No error of principle is alleged.”

The sentencing justice and the appeal justice were found to have applied the relevant existing jurisprudence. The appeal judge concluded that the sentence imposed was not manifestly unfit. TCCL’s conduct bordered on recklessness. Its annual revenues exceeded $100 million dollars.

“There is no basis advanced which would allow this court to conclude that it is essential in the public interest or for the due administration of justice that leave to appeal be granted,” the justice ruled, dismissing the appeal.

Property owners, developers and contractors are encouraged to contact MVCA prior to conducting development or site alteration in or around wet, seasonally wet and near-shore areas to determine how the regulations may apply. The regulations are in place to ensure safe and sustainable development.

Every person found guilty of an offence that contravenes a regulation or the terms and conditions of a permit issued by a Conservation Authority is liable to a maximum fine of $10,000 or to a term of imprisonment of not more than three months. Additionally, the court may order the removal of the development, at that person’s expense, or rehabilitation of a wetland or watercourse.

MVCA is one of 36 Conservation Authorities in Ontario. Formed in 1968, MVCA’s mandate is to manage the watershed’s resources in partnership with our eleven member municipalities and the Province of Ontario. All wetlands in the Mississippi Valley watershed that meet certain criteria are regulated including Provincially Significant Wetlands (PSWs)