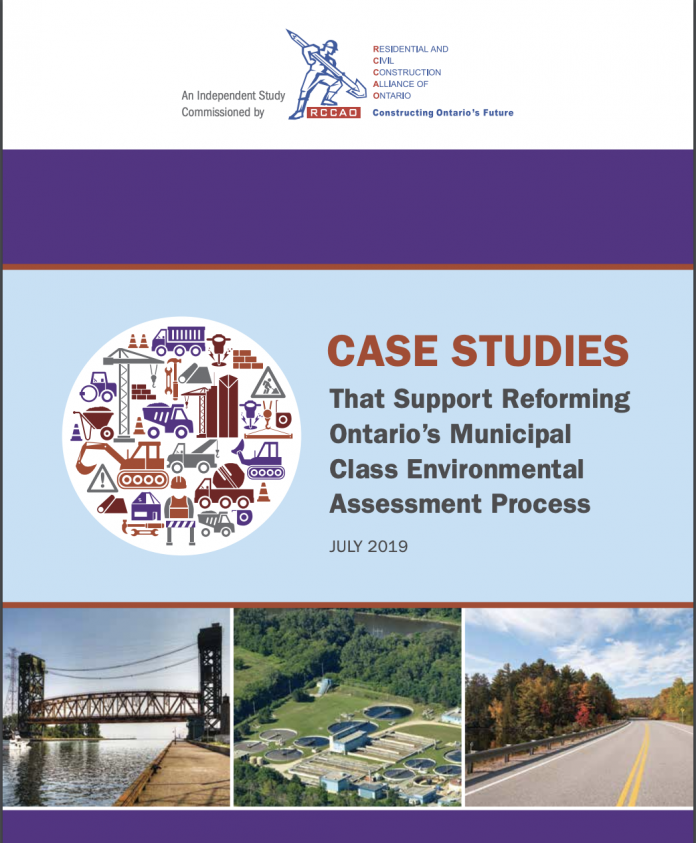 The report, entitled “Case Studies That Support Reforming Ontario’s Municipal Class Environmental Assessment Process,” summarizes 12 recent projects, nine of which are road-oriented, two involve bridge structures, and one is a water project. 10 of the 12 municipal projects took 2-5 years and over to go through the process.

The MCEA is meant to be a streamlined alternative for larger scale projects, compared with the individual EA process, but standard municipal projects like new roads, bridge rehabilitation, and flood control are seeing longer delays to approval.

“Under the current regime, rebuilding aging structures or constructing new infrastructure is taking too long under the MCEA process, especially when Ontario municipalities must ensure that our public works are more resilient to withstand severe weather events,” says Frank Zechner, an environmental lawyer and engineer.

RCCAO has commissioned several reports on the MCEA system over the past 10 years. Those reports showed studies took up to an average of 27 months to complete, at costs averaging up to $386,500.

One example from the report is a case study on Peterborough’s proposed improvements on the Parkway Corridor, which represents a large MCEA schedule C project. Council approved a $79-million plan to complete the parkway over a 20-year period. EA report was completed in February of 2014. As a response to requests for further study, the former environment minister determined an individual EA even though ministry staff determined the MCEA process addressed the concerns. The minister’s order would represent an additional up to eight years on the project timeline, and $6 million more in administrative costs.

“It is important to note that for all 12 projects examined, the costs listed exclude staff time and resources, which can be significant, to carry out the various consultations and other measures required by the MCEA process,” Zechner said.

“We are pleased that the Province released a discussion paper on modernizing Ontario’s EA program, and we hope that this report provides further impetus to reform the Municipal Class EA system. There is a lot of overlap in consultation processes between the Planning Act and the MCEA requirements,” said Andy Manahan, executive director of RCCAO.

Manahan said RCCAO is committed to working with the municipal sector and Ontario’s government to improve the process.