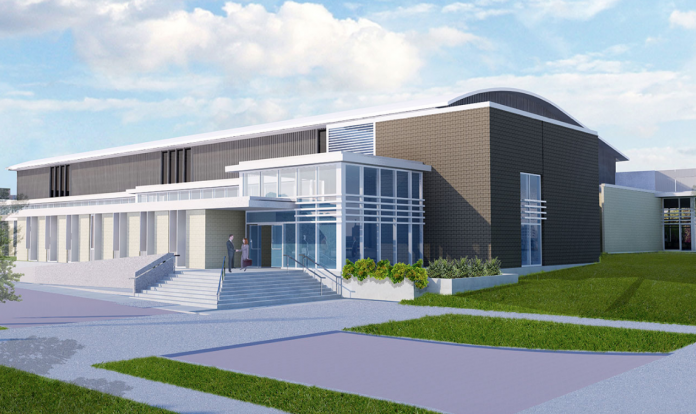 The Labourers’ International Union of North America (LiUNA) has spent the past couple of years revamping its education facility in Richmond Hill, to make spaces for 120 more apprentices and four recognized training programs.

The LiUNA Local 506 Training Centre, complete with upgrades, is almost done – doors are set to open prior to the start of the school year in September.

The centre will be bigger – a lot bigger, says Elie Newman of BNKC Architecture Firm, the lead architect for the LiUNA renovation and expansion. The original facility has been upgraded, but the expansion added an additional 48,000 square feet, almost triple the size of the original centre.

Newman says the site, first and foremost is a very functional place for learning for the many skills training programs and four recognized apprenticeship programs that are offered there, namely construction craft worker, cement finisher, precast erector, and hazmat worker.

While many times trades training is done in old industrial settings, the LiUNA 506 facility contains three large industrial training halls, two of which are 500 sq. m., while a third is 850 sq. m. in size. Twelve metre-high ceilings mean students can practice skills like large equipment handling or high scaffolding construction in the room, which are next door to workshop-sized rooms. Multi-functionality and integration between activities are ingrained in the building’s design. There are even spaces left without concrete flooring, so students can pour the concrete themselves during training programs.

But Newman says an equally important aspect of the new build is the role the facility plays in the community. LiUNA’s education centre was placed well back from the road at Major Mackenzie Drive in Richmond Hill. Newman says by bringing the building forward into the streetscape on the major thoroughfare reflects the cultural changes that need to happen in the perception of the skilled trades.

“There’s a shortfall right now, it’s pretty important the work that they do. The kind of facilities that normally train are older industrial spaces or an industrial space – not inviting, not set up to cutting-edge fashion to teach the skills that are needed,” Newman says. “The new centre is inviting: it’s open it’s light filled, it’s airy. That’s good for teaching. It’s well-known, no matter what you’re training.”

Integration into the community goes beyond a street presence. The education facility has a 4,000 sq. ft.  meeting hall, which can be used for LiUNA meetings or community events. Its community presence also involves working sustainability into the fabric of the building’s design. Newman says large rooms borrow light from above or from other rooms, to reduce lighting needs, while canopy and shading devices reduce cooling requirements in hot weather.

Due to the sloping nature of the campus site, storm water was a big issue, because runoff from the site needed to be sensitive to the connected water systems. To ensure the safety of water systems, a bio-retention basin, kind of a pond,  takes storm water off exterior training area, cleans it, and delivers it to a network of underground basins before water reaches external systems.

The LiUNA Local 506 Training Centre expansion and renovation is an estimated $13 million project that broke ground in late summer 2017.