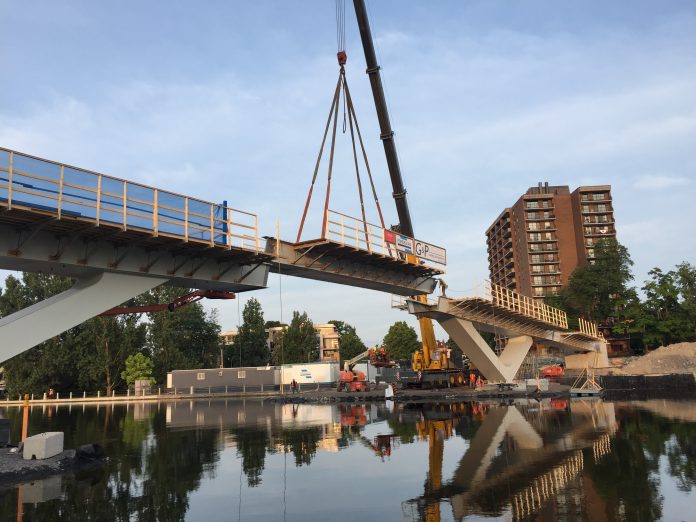 A $21 million dollar Rideau Canal bridge erected at the crossing of Fifth Ave. and Clegg St. is set to improve commuting for pedestrians and cyclists.

The project, led by general contractor Pomerleau and commenced in September 2017, will be groundbreaking in connecting three Ottawa communities.

It has also been a complex, challenging project for G&P Welding and Ironworks, the company in charge of constructing the bridge’s structural steel and railings.

The combined contract, which involved both bridge and railing construction, required knowledge in many different facets of the steel fabricating industry, including material types, welding and welding procedures, material forming, erecting/installing and the ability to transport very large fabrications through the Ottawa’s downtown core.

Christian Popp, vice-president of G&P Welding, said the complexity of this project in particular tested his team’s capabilities and capacity.

“Our decades of experience covering different industry sectors, different fabrication variety and experience, and metallurgies we feel was an ideal tribute to our accomplishments,” said Popp.

As a leader in the Ontario and Quebec bridge and building spaces, Popp explained how the project highlighted some of his team’s abilities in a number of ways.

“How the bridge would be erected played a part in how it would be fabricated. Many erection-related provisions needed to be designed and incorporated early in the fabrication schedule,” Popp explained.

“It goes without saying the erection engineering began even before the fabrication started. It is not always necessary to do it this way on most projects.”

The bridge was constructed with V-Piers, two supporting “V” shaped frames, which presented some challenges that needed attention early on. Controlling the geometry during the fabrication and quality control processes was essential, as key sections were heavy and required carefully planned trial-assembly methodology.

Other challenges included ensuring these oversize components could be transported from G&P’s facilities in North Bay over to the jobsite on the Rideau Canal, as well as its specialized coating system required many precautions to be taken.

Finally, Popp mentioned the many restrictions involved in the project specifications also proved to be a challenge for the erection scheme. These restrictions included shipping through the downtown core, then on to Queen Elizabeth Drive and Colonel By Drive, and finally to the unloading points where cranes were located on temporary rock pads prepared in the canal.

“The abutment girders and the sections over the V-Piers were erected using temporary shoring towers to provide support as they were being connected,” said Popp. “All of this had to be done before the centre girder over the canal was installed.”

“All in all, the amount of planning required ahead of time and the strong partnership with our subcontractors was essential to meet the challenges of the project.”

“The hallmark of any successful project for a steel fabricator like G&P Welding is when all the planning and precautions that were taken pay off in the end,” he explained.

“When you have so many restrictions in the contract for road closures and canal closures, you need all team players to do their part, whether it be the general contractor, the City of Ottawa, the design team, your own employees or your subcontractors.”

The challenges involved in the project, as well as the innovative result in improving the city’s access between Old Ottawa East, the Glebe, and Old Ottawa South means it has also been a rewarding experience.

“We liked being part of such a unique project that requires a higher standard of construction,” said Popp. “A visually stunning project like this one suits the landscape perfectly in the nation’s capital.”

“When the centre-span of the structure gets hoisted into place flawlessly, and the first boat crosses underneath a few moments later, you definitely feel the sense of accomplishment.”