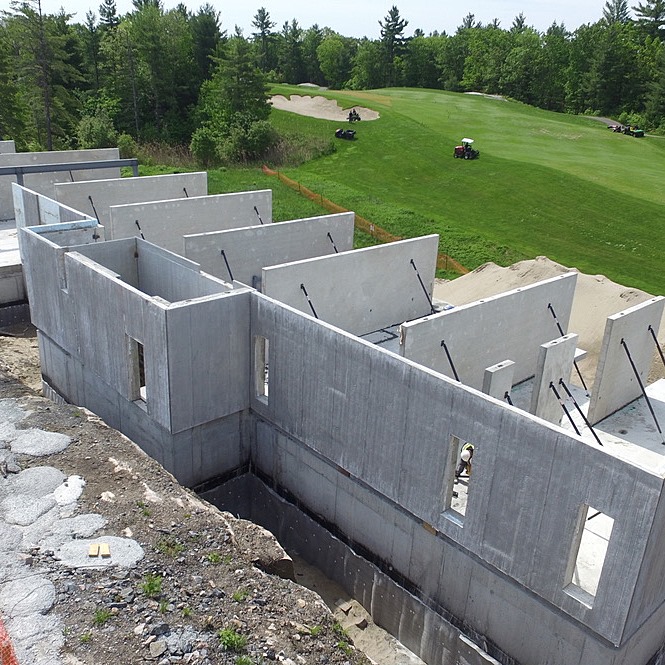 With tilt-up construction, concrete panels are cast either on or off-site and then hoisted up and tilted into position. These panels then become the building’s load-bearing structural components, eliminating the need for perimeter columns.

The Muskoka Bay Resort apartment building was built using 381 precast tilt-up concrete panels. The panels’ width ranged from 1.5 metres to over 18 metres, with weights ranging from one tonne (3,000 pounds) to 58 tonnes (128,000 pounds). These panels formed a five-storey multi-unit residential apartment with a sixth storey on three stair towers.

Tilt Wall Ontario project manager Ken VanCasteren elaborated, “We utilized two different sized beams and, between the two, they were used for about 80 to 85 per cent of the picks. We did not adjust the lengths of the beams during the lifting process but instead used the two different beam sizes to allow for quicker rigging changes. For the MOD 110 we used an eight-point pick for load distribution and on the MOD 50 we used a four-point lifting setup.”

The LG 1750 lifted panels horizontally to the required height and then tilted them upright into place by sliding the wire rope links through the snatch blocks attached to the spreader beam.

According to Modulift, the spreader beams are designed to be particularly stable and trusted for this type of manoeuvre and are compatible with snatch blocks. The Tilt Wall Ontario team then braced the panels until the permanent structural connections were completed.